When we first started looking for a dog, I didn’t think much about the pros cons of adopting a rescue dog. Instead I became completely enamored with the idea of having a puppy. And looking back, I’m probably not the first person to head down that path.

Puppies are adorable, but they do grow up, and puppies are also a lot of work, I learned. Soon we began considering an adult dog instead of a puppy and learning more about rescue dogs. Today I’m sharing everything we learned, including some pros and cons many people overlook. 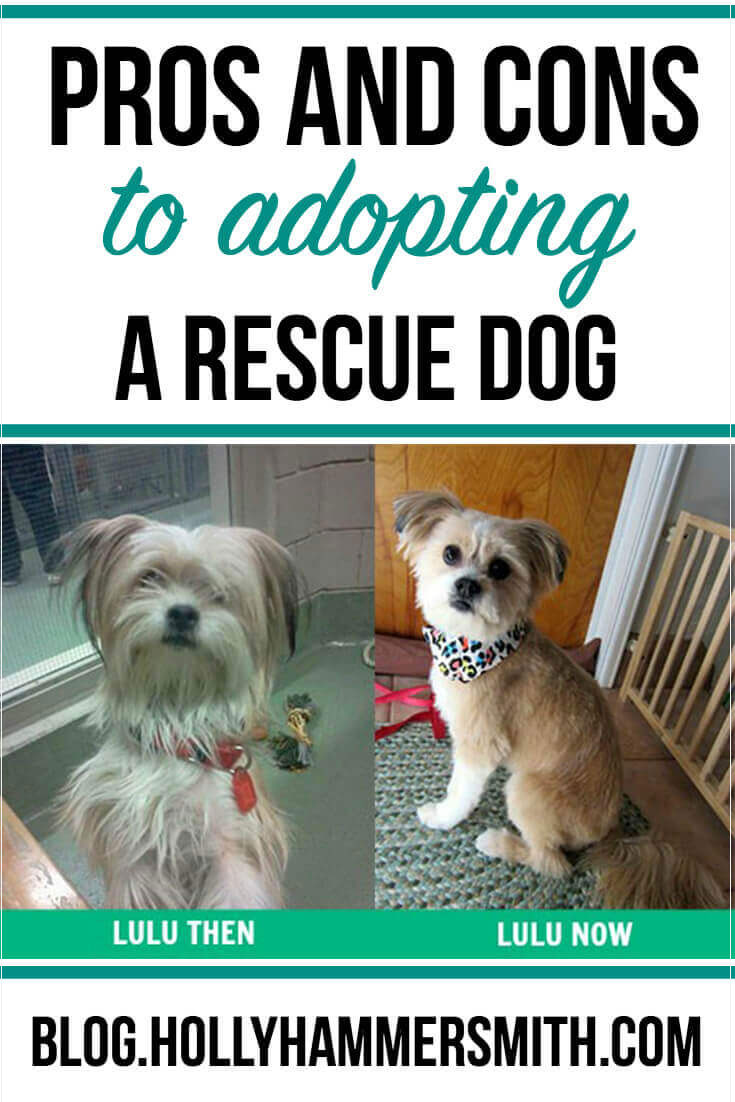 Puppies Are Not For Everyone

I knew very little about having a dog before we got Lulu. Lulu is the first dog I’ve ever had. Growing up, I had pet hamsters, and at one point, two goldfish. My husband, on the other hand, did have larger pets growing up. At one point he had a pet cat and later, a pet dog.

He quickly said a puppy would not be a good option for us. I kept pressing the matter, not knowing why a puppy was a bad idea. Of course I kept looking at cute photos of puppies online during this time – both on breed websites and any puppies that were listed on rescue dog websites.

As it turned out, he was right. An adult dog was better for us. I also invite you to consider an adult rescue dog, even if you have a lifestyle that might be conducive to a puppy, you should consider the pros and cons of adopting a rescue dog. Today I’m sharing how we made this decision and the experience we had with adopting an adult rescue dog.

Why a Puppy Was Bad for Us

There are a few reasons why we decided a puppy was a bad idea for us. Let me preface this with saying at the time, we had a home, ample room for a dog and did not have any children. The size of your living space and family dynamic may also play a role in what age and type of pet is best.

What we didn’t have at the time, was the time to devote to housetraining a puppy. Puppies have to be taken outside frequently to use the bathroom and they also need to be taken out in the middle of the night. They can’t wait to go for 8 or 12 hours like an adult dog can.

This was a big factor in the pros and cons of adopting a rescue dog. We were both working full time and commuting to work so we were gone for more than eight hours a day, five days a week. We would need to hire a pet sitter, use dog daycare or not get a puppy.

Pros and Cons of Adopting a Rescue Dog 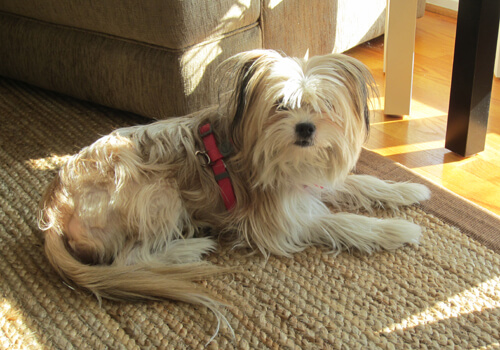 We were both commuting to work, averaging 10 to 12 hour days, and could not come home from work during the day to tend to the puppy. A puppy could not be left alone for that long. If we were to adopt  a puppy we would need to invest in a dog walker or someone to talk the dog out during the day for bathroom breaks.

This was an added expense we did not want and while this was a large deciding factor in why we adopted an adult dog, I do want to mention that we did have to do a potty training refresher with our dog Lulu. We later learned PoochieBells are a wonderful house training tool for any dog!

I was initially crushed that we weren’t going to get a puppy. But, today I realize our Lhasa Apso mix Lulu was meant to be with us and I couldn’t be happier. In addition, after learning about the needs at shelters for dogs to be adopted and the immense need to rehome adult dogs, I’ve become an advocate for the adoption of adult dogs.

Here are a few things I learned during the first full year we had our rescue dog Lulu. Even though she was an adult dog when we adopted her (se was two years old according to the shelter paperwork), in many aspects our first year with her was like we had a puppy. This ended up being a welcomed surprise in the pros and cons of adopting a rescue dog. 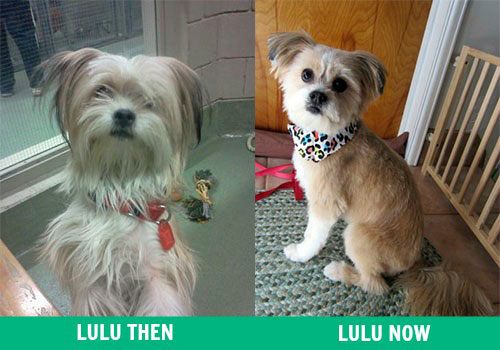 Here are a few of the pros of adopting a rescue dog. There are some shelters with puppies, however, for most intents and purposes I am sharing pros associated with a full-grown adult dog:

• You are saving a life, cliche but so true.

• Your dog may be housetrained which saves you time and effort.

• Many rescue dogs are mixed breeds, meaning they are less prone to breed-specific health issues and may live longer. 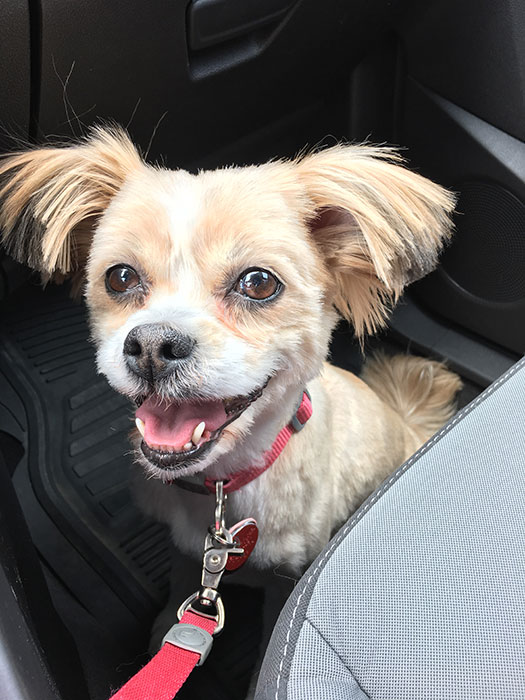 I want to be completely transparent so I’m also sharing some of the cons to adopting a rescue dog. Again, we are assuming the rescue dog is an adult dog and you are adopting from a dog shelter.

• It is difficult to find and adopt a puppy. Although, some shelters have them, ie. a rescue dog who recently had a litter.

• Your dog may not be house trained or may have forgotten the house rules. We used PoochieBells with great success to house train Lulu. I highly recommend them!

• Little or no medical history. We later found out Lulu has allergies, apparently to both beef and poultry. She now eats and loves Zignature dog food and we give her Zuke’s Mini Naturals Dog Treats.

• You may not find the exact breed you want. We had several breeds in mind when we were adopting to allow options.

• You may have to answer some personal questions, which can be uncomfortable and unexpected.

Pros and Cons of Dog Adoption

Today, looking more at the pros and cons of adopting a rescue dog, we were able to teach Lulu house training again (it took a while but she was able to be left alone while we worked with no issues). I would also highly recommend investing in a good dog trainer, whether you have a puppy or rescue.

We hired a dog trainer for what was basically a one-week doggy boot camp. It was 100% worth the investment and we have now had the pleasure of living with a more obedient and a good walking dog (does not pull the leash) for nearly eight years!

We did research immediately and had Lulu walking without pulling on her leash within two months which helped with any previous behavioral habits she already had as an adult dog. These are some of the pros and cons of adopting a dog.

I sometimes wonder what her “mix” is, and also wish I knew what her doggy parents and siblings looked like. But these wishes and hopes are not a deal-breaker. If given the chance, I would adopt again and support rescue dog adoption.

Pros and Cons of Adopting a Pet 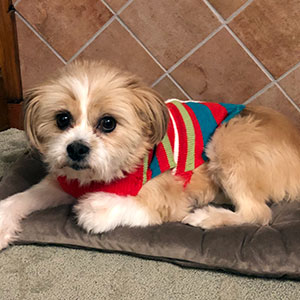 If you are local to Cleveland, Ohio I can’t recommend the Cleveland APL enough. Their process was easy and non-intrusive. That is the place we adopted Lulu from in 2012. We have now had our rescue dog for almost eight years.

*This post was originally published in 2014 and has been updated and republished for accuracy and comprehensiveness.