I received a lot of questions right after our daughter was born as to how her and our rescue dog Lulu were adjusting. Apparently dogs and babies are a hot topic! I continue to receive the questions so here’s the whole rundown. Looking back now, each period has had it’s challenges and benefits. 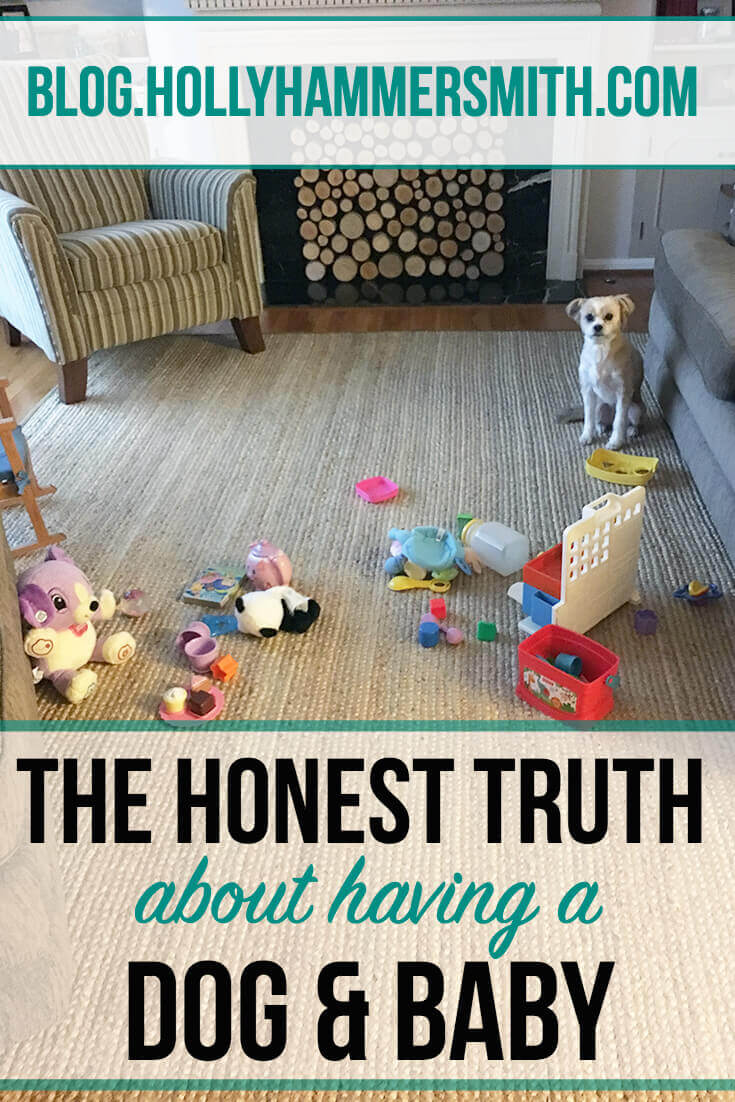 Prior to our daughter’s birth, my husband and I had a handful of discussions about how life with a dog and baby would be. I also read up on tips on how to best adjust and introduce your dog to a baby.

Lulu had been around toddlers a few times in the past, but not on a regular basis. To our knowledge she had never been around a baby. During the last few weeks and months of pregnancy we began to give Lulu a little less attention.

It may sound harsh but this was one of the tips we had read. Once the baby arrived we would be forced to spend less time with our dog, so adjusting her slowly was ideal. The natural progression of pregnancy helped with this.

While I remained fit and healthy during my pregnancy, my stamina and mobility waned more and more as I got closer to my due date. I used to walk an easy 3 miles daily with Lulu. 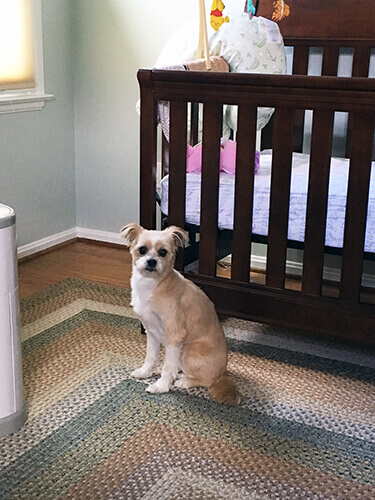 After the birth, my husband took a baby blanket home from the hospital and let Lulu smell it. When we arrived home a day later we came in the door like normal which was to not greet or overexcite Lulu.

Of course she noticed something was different – there was a little person in a car seat making noise! We took our daughter out of the car seat a few minutes later and held her and sat in the living room and didn’t make eye contact with Lulu or act like anything was different.

We just wanted her to calm down to the idea of someone else being in the house. After some time had passed we did let Lulu sniff the baby. When our daughter began to cry Lulu freaked out.

Lulu started whining and yelping. We chose to ignore the behavior. Within two days Lulu stopped and came to terms with a crying baby being the new norm in our household. By ignoring her we did not draw attention to her behavior or provoke her to continue it. 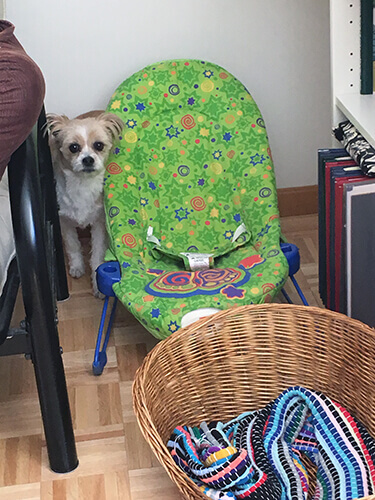 Besides the whining, Lulu did act up a bit during this time, which is probably why everyone asks about how dogs and babies work together. The odd part was she began acting up late in my pregnancy.

She started jumping up on furniture, which we had previously trained her not to do. After our baby’s birth Lulu continued to do this so we had to be vigilant to catch and reprimand her.

She also jumped on the couch a few times and tried to steal and eat my nursing supplies. She did the same with a few pieces of baby clothing that had spit up on them.

I suppose the smells were too enticing for her. Dogs get into the worst things, don’t they? Eventually the behavior stopped. In many ways this period was easy.

We could sit our daughter down and let her play and Lulu would ignore her because the baby wasn’t showing her any attention. The two of them basically co-existed for many months.

Once our daughter learned to crawl this changed. She could crawl up to Lulu and pull her fur. Lulu expressed a mix of confusion, intrigue and in some ways – was a glutton for the attention.

This is where we are now with the dogs and babies situation. Our daughter’s ever increasing mobility means we are still figuring things out as we go.

Sometimes our daughter has pulled at Lulu’s fur a little too much or too hard and Lulu has growled. In these cases we have been quick to defer the situation either by telling Lulu to move (literally with a command) or redirecting our daughter elsewhere, such as to a toy.

It has taken some time but I think now Lulu finally is understanding that growling at the baby is not OK and that if she doesn’t want to be touched she can go elsewhere.

Usually Lulu would go to her crate which was a “safe place” per se, until our daughter discovered the crate! Now she tries to shut Lulu inside. Poor pup! 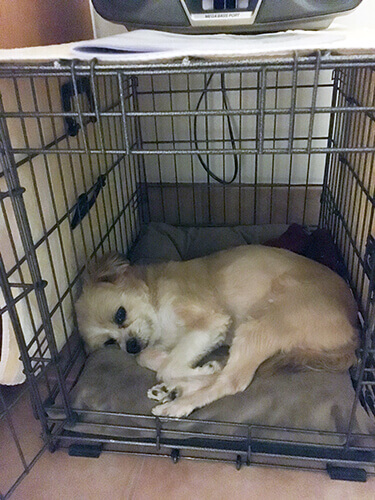 If the house is eerily quiet we usually know one of the two of them is up to trouble. It has helped tremendously that we had Lulu trained prior to our daughter’s birth.

We can easily give commands to make Lulu come to us or move away from a situation or go to her crate. This helps when my hands are full and I can’t physically pick up either of them, or when I’m in another room and hear something going on.

Several months ago we caved and finally put a baby gate up. One of the reasons we delayed was because we had previously taught Lulu to ring a bell to signal she has to go potty.

The gate prohibits her direct access to the bell and we have nowhere else to put the bell. Fortunately it hasn’t been a huge problem. Lulu hasn’t had any accidents and if she has to go out now she usually paces or whines a bit – she lets us know! 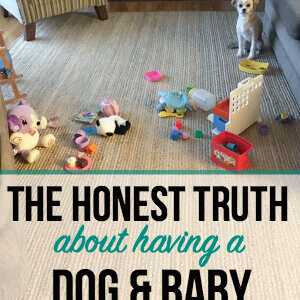 I have also mastered walking with Lulu and with our daughter in a stroller or baby carrier. Again, Lulu’s training to “loose leash” walk was paramount as walking the two of them separate is not always realistic or time-efficient.

I do sometimes still walk Lulu alone and we will take a fast-paced walk. The stroller walks are more easy-going, family time.

I wish Lulu played with dog toys or would play fetch (two things she has never taken much of an interest to). I feel bad sometimes I can’t walk her as much as I used to or that she doesn’t receive as much attention these days.

But even on the worst days, I remind myself that Lulu is groomed, fed, has a clean bowl of water, a cozy bed and a sunny south-facing window to look out anytime she wants.

Do you have a dog and small children?

How has it worked out?