In case you didn’t already satisfy your sweet tooth this Christmas season, it’s time for some homemade pecan pie. While this pie can be made for Thanksgiving, I prefer to make it for Christmas most years.

This year I am baking Pecan Pie on Christmas Eve. It helps to bake this pie a day in advance so the actual holiday is more relaxing. Once cooled, it stores well at room temperature. I usually store it in the oven or microwave with a reminder note the pie is inside. 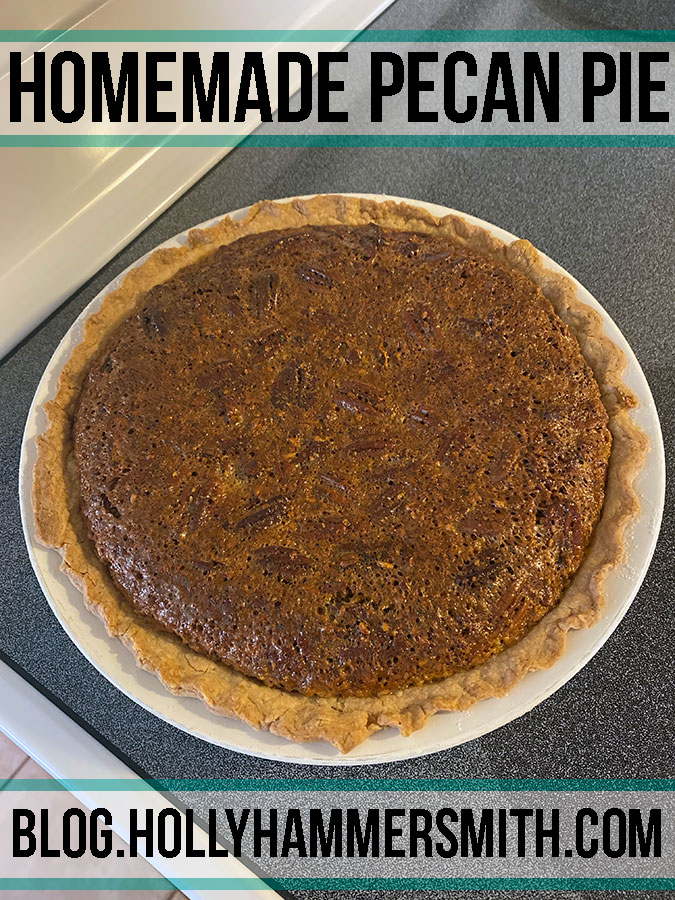 Pecan pie only contains a few ingredients. I find it easy to make as it’s one of what I would call a “mix and dump” pie. I also like that it only has one crust. While I like making homemade pie crust, a single crust is much easier and faster to make than a double.

Honestly, this pie is so easy to make you would be hard pressed to go wrong. Some people find Pecan Pie to be too rich and sweet. It is definitely sweet but I really like it. Something about the way the pecans get toasted brown on the top and then the rich filling inside. It’s perfect.

But being it is sweet a small slice is best. I also only tend to make this pie once a year. It’s not a pie I make during any other time of the year. That being said the bottle of corn syrup needed to make the pecan pie has the exact amount for two pies so I often end up making a second Pecan Pie shortly after Christmas in order to use up the second half of the bottle.

In junior high I learned to make pies and started a tradition of bringing them on Christmas Day. It was an annual tradition for me to make Pecan Pie for many years after that. It had been a few years since I had made one and then I revived the tradition briefly in 2011 for Thanksgiving.

I found this old photo to share of me making the pie. At that time it had been a few years since I had made one, mostly due to moving and having to travel the last few years prior to that for the holidays. It can be hard to travel and bring fresh food to contribute for holidays.

While I made the pie in 2011, I then took another short hiatus from making the pie. It has now been brought back, permanently I think as part of our Christmas tradition since the last few years. Pecan was also my grandpa’s favorite pie so it holds special memories for me. 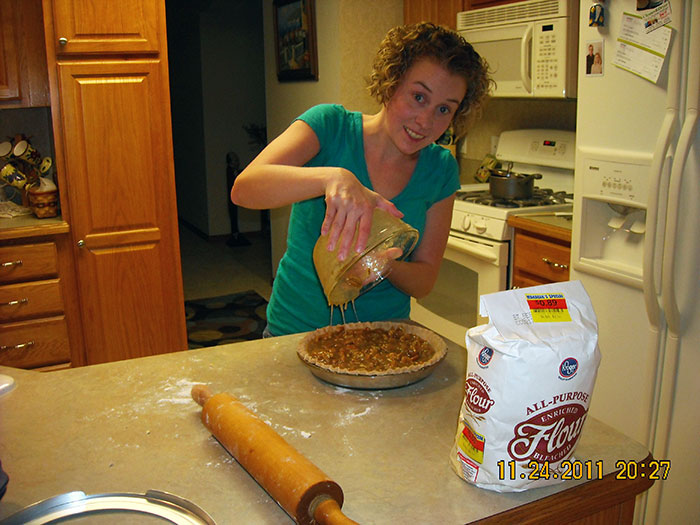 As always I made a homemade crust, I prefer half white flour and half wheat flour. The recipe on my recipe card is the one from the Better Homes & Gardens Cookbook. I’ve made the pie so much I haven’t memorized the recipe but I found it was easier to write it out on a handy recipe card, rather than find it in the book every year.

I also use their pie crust recipe for my homemade Pecan Pie crust. This being said a few years ago I was able to copy down my grandmother’s pecan pie recipe. While I don’t specifically remember her making it, I’m sure it’s a good recipe and it sounds extra rich! Because many recipes are copyrighted, I wanted to share hers as it’s one of those old school recipes you aren’t going to find anywhere else!

Doesn’t that sound amazing? I need to find the dark corn syrup to make this happen! Below are some photos of my Pecan Pie from last year, including my homemade crust prior to baking. I also always use a pie crust shield to protect my pie crusts from burning. I usually let the crust bake 5-10 minutes without the shield to slightly brown it. 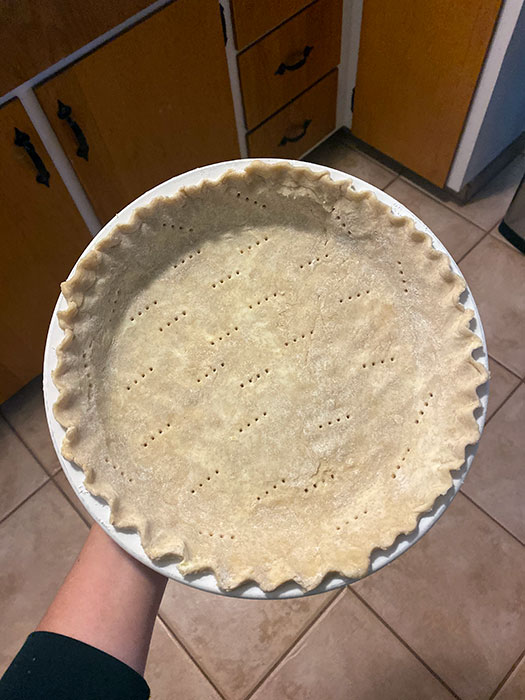 Then after baking and cooling this is what the Pecan Pie looks like. Again, I would emphasize this is not only a delicious pie but an easy recipe. I love making homemade pie crust and find that is the best tasting pie crust but if you are nervous about that part you can also purchase a pre-made pie crust instead.

The pie cuts up very nicely, it’s a bit sticky but that’s how you know you made it right. I tend to also go heavy on the pecans. Most recipes call for 1 Cup of pecans. I would consider it a “heaping cup” when I make Pecan Pie. I like to have some nuts chopped, halved and whole. 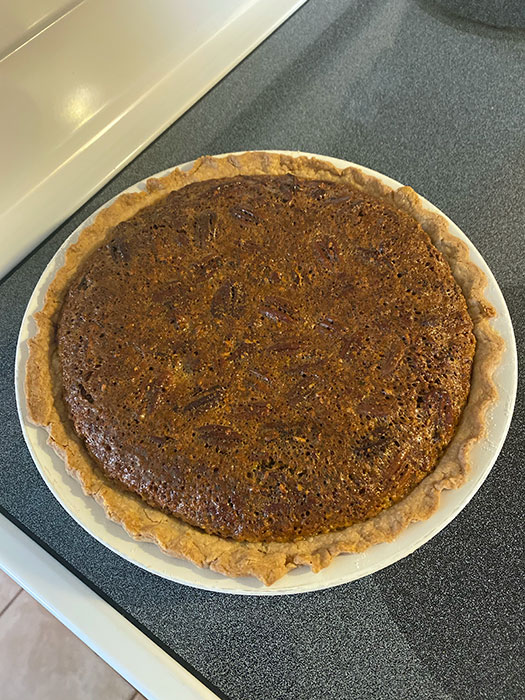 The whole pecans tend to float to the top of the pie which adds a nice visual touch. A normal sized slice of this pie can easily be 400 to 500 calories. I usually cut smaller slices for this pie so instead of serving six it could serve 12. Also, Pecan Pie freezes well so if it’s too rich to finish you can easily slice it into portions and freeze it to enjoy later.

I hope this post inspires you to try baking homemade pecan pie. It’s really easy and if a 13-year-old can do it, I’m confident anyone can! I’ve probably made this pie at least a dozen times or more now. If you are intimidated by making your own crust you can buy a pre-made or frozen crust.

Pecan pie can be expensive to make, as the price of nuts per pound has risen in recent years. I try to buy the pecans when they are on sale, if possible. That being said if you watch the grocery ads, usually they still go on sale for Thanksgiving and/or Christmas so keep an eye out! 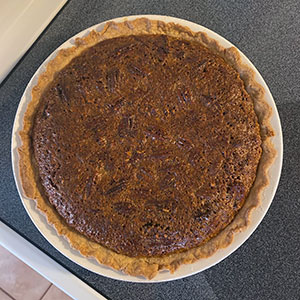 Making this special pie just once a year is a real treat. I enjoy it more when I only have it once a year. It’s also very rich so beware! A small slice can go a long way. I usually am able to make two pies from one bottle of Karo syrup. If you have any questions about making this pie be sure to comment below and I will help out as best I can.

What is your favorite Christmas Day dessert?