The reason I stopped taking my multivitamin was due to my own personal well-being, but there are a lot of reasons for and against taking a daily multivitamin so I want to cover those as well today. 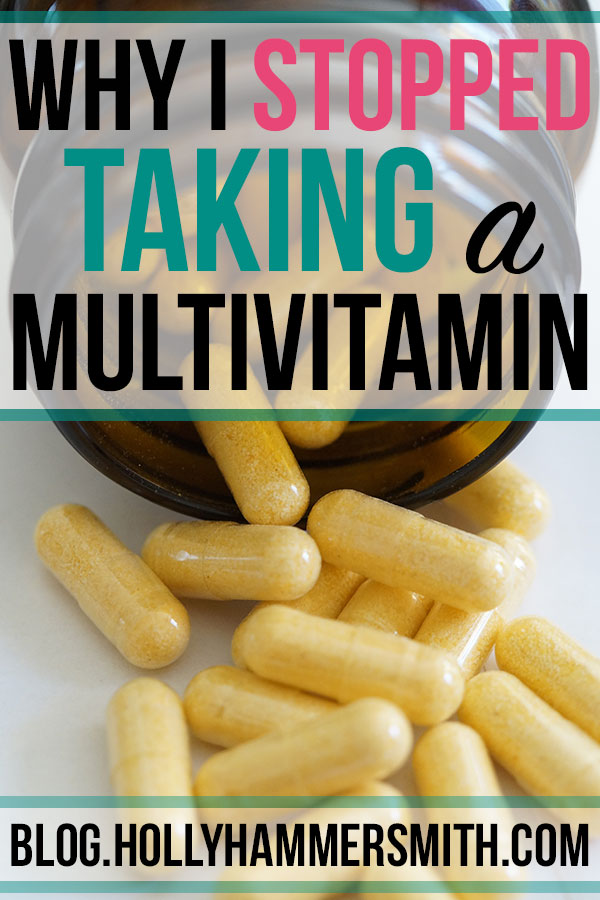 Why I Stopped Taking My Multivitamin

What Happens When You Stop Taking Vitamins?

Also, the jury still seems to be out on whether everyone should take a multivitamin or not and the views shared by health experts in the mass media has changed – even over just the last few years.

I remember how I felt the day I stopped my multivitamin – fed up. For years when I would take my vitamin I would be overcome with extreme nausea shortly after. It would stop me dead in my tracks, I would plead with my body for the feeling to pass, most of the time I would get sick to my stomach and I even threw up a few times.

This seemed like such a terrible side effect to consuming something that was meant to make me “healthy.” Before stopping my vitamin I tried a few different brands, without luck. I also tried taking my vitamin with food, without food, in the morning and at night. I was getting sick no matter what. I decided this health supplement was not very healthy, for me, to cause me to be so sick.

I’m not sure why it took me so long to stop taking the vitamin but I stopped. Around the same time I decided I would search on Google for my problem. I typed in “vitamin making me sick” and within seconds I finally had an answer. It was the iron in the pill. It was too much for my system and making my stomach upset. Vitamins make me sick.

I followed up with my family doctor who said, “If it’s making you feel sick, don’t take it.” Because I consumed a well-balanced diet and regularly eat fruits and vegetables, she said I should be fine without taking a multivitamin.

Why I Started Vitamins Again

Because I had tried several vitamins by that point to consume vitamins, I just gave up and decided my body wasn’t cut out for taking vitamins. I figured my health would be better without that daily nauseous feeling. That was in 2013. Fast forward two years later and I was pregnant with our daughter.

Other moms told me I should take a pre-natal vitamin and my midwife confirmed this at my earliest appointment. While I wanted what was best for my baby, I also somewhat, begrudgingly went vitamin shopping again. I knew nausea was a common pregnancy symptom so at the end of the day I guess it didn’t matter if the baby or the vitamin was making me sick again – it was going to happen!

Until it didn’t. I ended up purchasing Nature Made Prenatal MultiVitamins and they didn’t make me sick. Another option to try if vitamins are making you sick and you aren’t a woman or don’t want to take a prenatal vitamin is to cut your daily vitamin in half. This can reduce the iron content to a level that won’t upset the stomach.

Should I Stop Taking Multivitamins? 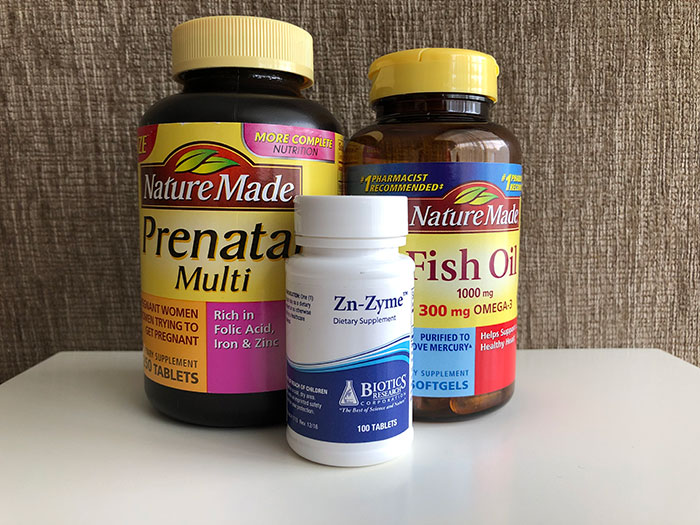 What Vitamins Don’t Make Me Sick

I’ve never compared exact iron amounts but for some reason the amount in this vitamin does not upset my stomach. I’ve actually continued to take this same vitamin daily now for more than five years, which is after why I stopped taking my multivitamin.

Pregnant or not – I’ve decided I’d rather take a vitamin that doesn’t make me sick than to try testing the waters again with any other brand or a “regular women’s vitamin.” Ironically around the same time I had stopped taking my daily multivitamin I had blood work done and was found to be deficient in Vitamin D.

This is a common and known problem where I live according to my family doctor, as it’s very cloudy and the winter is long in Cleveland, Ohio and most people do not get outdoors enough in the winter here to gain natural Vitamin D from the sun. Another common source of Vitamin D is from milk.

I supplemented with 1,000 IUs of Nature Made Vitamin D daily for many years after that blood work came back showing my deficiency. Then in 2018, I had my blood work done again and my Vitamin D levels were normal – I had not been taking Vitamin D for many months prior. This gave me the reassurance I was now getting enough Vitamin D from my diet and the sun and no longer required supplementation.

At the time I had run out of Vitamin D and frankly hadn’t gotten around to buying more. Today, in 2021 I now do not take a Vitamin D supplement. I do make a more conscious decision to get out in the sun in the winter when I can and will try to walk our rescue dog Lulu on those days in particular.

I think the winter walking has helped my Vitamin D levels, and also improvements to my own diet. I take my daily multivitamin, sometimes Grapeseed Oil Extract and Zinc, especially during the cold and flu season. I have also dabbled with Iodine and Vitamin C supplements.

And I also take fish oil supplements for eye health. I’m allergic to fish so I struggle to get enough of those healthy Omega 3’s that are good for eye health. I have tried Nature Made Adult Fish Oil Gummies and also their soft gels and I prefer the soft gels.

Do You Eat Healthy “Enough”?

Looking back, when my doctor asked if I ate healthy, I said “yes.” There was no further discussion beyond that, except for a mention that I should be eating fruits and vegetables. Well honestly I don’t think I was eating healthy enough. Was I eating cups of kale and red beets every day? No.

How would I have the proper nutrients in my body that would allow me to not have to take a multivitamin? I have no idea. For a long time I thought I was healthy because I avoided fast food, bacon, mayonnaise and a lot of the foods most Americans love and eat much too often.

For so long I’ve followed that old pyramid plan released by the U.S. Department of Agriculture. Yes, I realize the pyramid is outdated today but it’s what I was taught and grew up with. As an adult I learned about calories, fat and started to gain a better idea of which parts of the pyramid were better or worse. 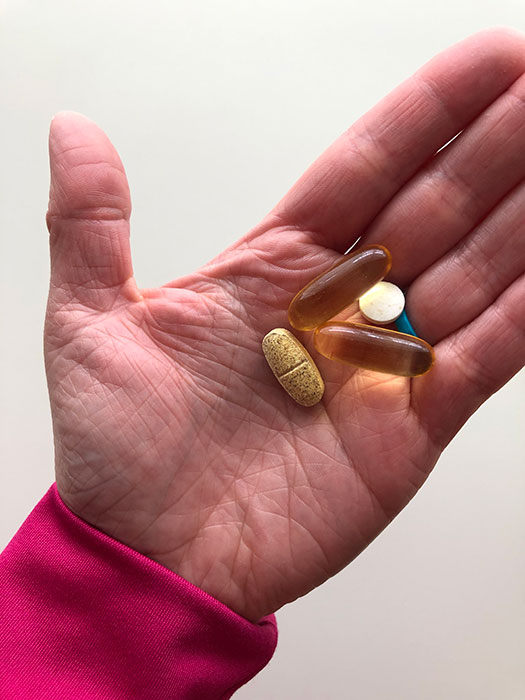 For example, I could consume nuts, but I learned almonds pack less calories and more nutritional punch than peanuts. I started to try new fruits and vegetables. I grew up in a meat and potatoes household. There are many fruits and vegetables I have now tried as an adult that I never had as a child.

Subscribing to an organic CSA has also helped tremendously in this area! In fact, I don’t think I knew what kale was until well after graduating from college. I think I had a wonderful foundation as a child and young adult for diet. But I think I can do a lot better.

When to Take a Multivitamin

To add to this, the frequency of cancer diagnosis and other diseases is alarming. And maybe even more concerning to me, all the genetic modification, pesticide use and other questionable practices surrounding mainstream food growth and preparation and distribution.

In fact these food practices are a reason why many doctors today are advising to take a multivitamin. Although there are also some advising not to take a vitamin.

For some the theory is that an apple grown in 1900 would have packed way more nutritional punch and contain fewer pesticides than today’s conventional apples. Soil has been depleted as well. These are some of the reasons many are turning to organic produce. This is also why I choose to grow an organic garden.

What Happens if You Stop Taking Multivitamins? 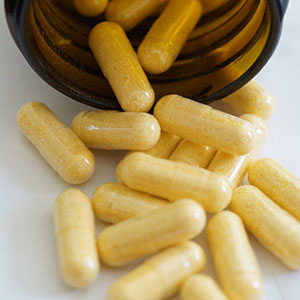 No one knows what their future may hold in terms of health or diagnosis, however, we do have a choice every day in how we eat and how we move our bodies. In this case, vitamins make me sick and this is why I stopped taking my multivitamin.

Right now, as of today in my vitamin journey, each day is not perfect and so for the days I miss eating kale and red beets I feel better taking a multivitamin. For me, right now, the benefit of the vitamin outweighs the risk of not taking it.

Do you take a multivitamin? Why or why not?

*This post was originally published in 2013 and has been updated and republished for accuracy and comprehensiveness.