It sounds a little scary and crazy, but this is the name for a condition in which your glute muscles stop working correctly or “firing” and leave a portion of your lower body weak and imbalanced. Having a weak butt can emerge in many forms from trouble with running, to lower back pain, pain while sitting and more. Today I’m sharing more about this condition, the symptoms I experienced and how to treat a dead butt. 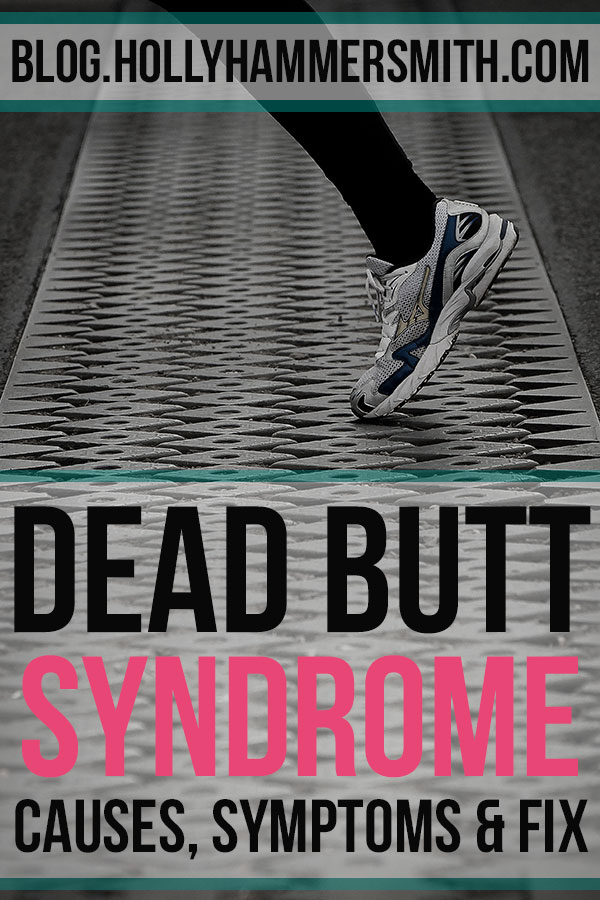 What Were My Weak Butt Symptoms?

Prior to experiencing this condition I had never heard of it. My story dates back to early 2011. I had been running consistently for about two years, averaging 20 to 30 miles per week. The condition emerged in the weeks and months following the completion of my first half-marathon in the fall of 2010.

After completing my race I took the necessary rest time and then slowly eased into running again. My goals were to complete a few 5Ks and 10Ks in the fall. But something wasn’t quite right.

The strange thing was I had no pain or symptoms in the area of my glutes. Dead butt syndrome actually manifested itself in one of my toes. I began to have pain in my toe while running. It may sound minor but over time it was becoming more and more troubling to the point where I wasn’t enjoying running or couldn’t complete my runs.

I went to several specialists, including a foot doctor and a running store, and was not getting answers. I even considered if my barefoot running adventures were causing the pain. 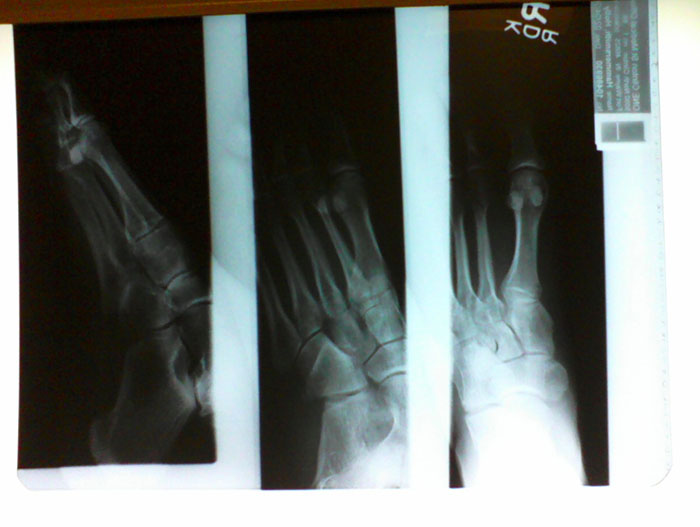 How is Dead Butt Diagnosed?

I was told I might have “turf toe” which is a common foot condition football players get when kicking a ball. Still seeking answers I finally schedule an appointment through my insurance provider with a sports medicine doctor. At that time I had not run in 26 days, nearly a month, which felt like an eternity for me.

By the time my appointment with the sports medicine doctor rolled around the toe pain wasn’t even there anymore. I told the doctor that the pain would always subside when I stopped running. Walking, taking spin classes, lifting weights and exercising on the elliptical did not cause the toe pain – only running. Turns out I had a weak butt.

As part of my visit to the sports medicine doctor he took an X-ray of my toe to make sure it wasn’t broken or sprained – it was not. He also looked for bone spurs and degeneration of tissue, there was none. He had me pace around the office while watching my stride. He also did hands on adjustments to feel where my hip bones were and to measure.

What is a Weak Butt?

Basically every time I kept running I kept pushing my alignment more out of whack and adding to the muscle imbalances. The toe area is simply where my pain manifested. For others it could be pain in other areas of the legs or the back. It just depends on your individual muscle imbalance.

What is a muscle imbalance? A muscle imbalance means one muscle is weaker than another. Muscles work in pairs, and to perform best each side of the pair should be strong. 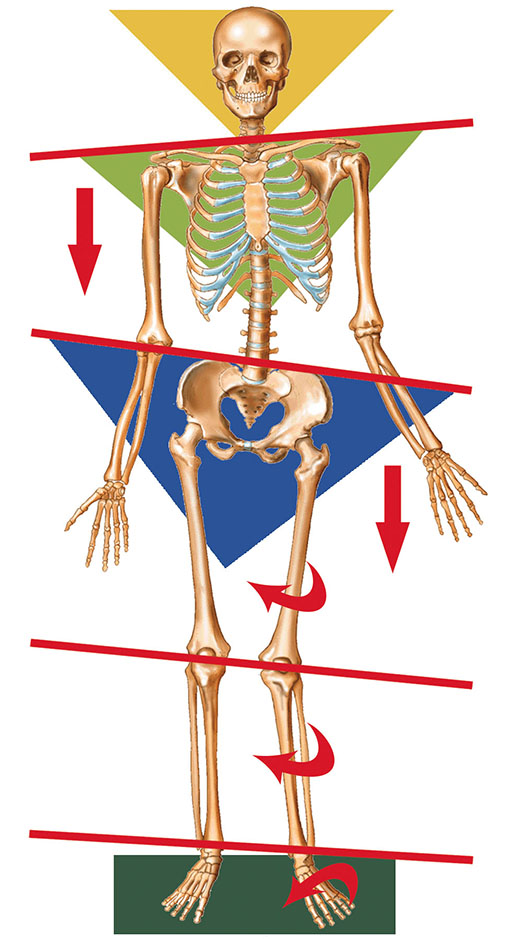 The muscle pair for the glutes is the hip flexor. This is the muscle in front of the hip that propels the leg forward when walking or running. For runners this muscle is used a lot. At the time that I developed a weak butt I wasn’t doing a lot of cross training, I was running a lot.

Fast forward to present day, I learned a lot recently about muscle pairs when I went to a yoga class led by Sally. She talked about weak glute muscles, how to engage them and strengthen them. If you are local to Cleveland I encourage you to check out Sally’s class at Inner Bliss Yoga. You can also follow her on Instagram for tips on fixing this condition.

What are Symptoms of Weak Butt?

He said my toe problem is not a toe problem at all. It’s a pain that manifested down there as a result of misalignment of my pelvic region. My body was trying to compensate for the alignment. The doctor said strength begins in the core and upper body. If there are issues up there they can roll downward – in my case to the foot and toe.

When I was diagnosed with weak butt, he found that my right hip was higher than the left, thankfully my legs were the same length, although having legs of differing lengths can be a contributing factor to this condition, he said.

I do have scoliosis as well. I was diagnosed as a pre-teen and had my spine realigned by wearing a brace. I asked the doctor if my scoliosis contributed at all to my weak butt condition. He said it was not a cause of my current condition, but also said he wasn’t surprised I had scoliosis when he saw my hip issues.

How is Weak Butt Treated?

The treatment for a weak butt is a weak glutes test and typically physical therapy, and this is the route I took in 2011 when I was diagnosed with the condition. The sports medicine doctor sent me to physical therapy sessions to strengthen some of my behind muscles – along with pelvic and hip areas.

The physical therapy sessions included both stretching and strength exercises to realign my body and improve my running form going forward. The therapy is also intended to reduce or stop pain – which in my case it did – the toe pain went away. During the sessions we also worked on side-to-side muscles that can become weak and are not used much during running.

Physical therapy sessions included a variety of tools and a glute workout which helped me learn how to strengthen weak glutes. There were also tools I used at home to help stretch and strengthen my body including:

I did ask the doctor if my barefoot running shoes were to blame for my diagnosis and he said he had no professional opinion on the shoes and that I could continue to wear whatever footwear I wanted. I was still confused, however, as to why the toe hurt so bad.

The doctor said my misalignment probably caused sesamoiditis, which was one of the initial hunches I had when the pain started. I had even talked to a former physical therapist about this and he agreed. My sesamoids were not broken or inflamed, and being I didn’t have pain at the time of the appointment, the condition had likely subsided.

The doctor told me I could continue to run as long as I felt comfortable. He told me to start back slowly at 2 miles at a time, twice per week, all while attending the physical therapy sessions. My therapy started in February and a month later in March I had a follow up appointment with the doctor at which my condition had greatly improved, along with my muscle balance.

What Can Fix a Weak Butt?

For me, following the directors from the doctor and going to physical therapy fixed my weak butt. Ever since the incident I’ve been more mindful of practicing whole body conditioning and strengthening. Today I still run but only a few miles a week. I think the problem really came to a head for me because I was running so many miles and not doing any other cross-training.

At the time of my diagnosis I had also recently taken on a desk job and was sitting a lot more. Sitting has shown to be a contributing factor to a weak butt, also known as gluteal amnesia, and the condition is becoming more and more common today as so many people work at desks and sit all day.

Check out my post about how to stay fit at your desk job to learn how to combat this. A few months ago I purchased a standing desk to help me to stand more during my work day. It has helped me tremendously.

I like the change in routine and my body is less achey after a day of working. I purchased the TaoTronics Standing Desk Converter and it’s been working great. I am having trouble finding that converter in stock now but here’s a link to a similar one. 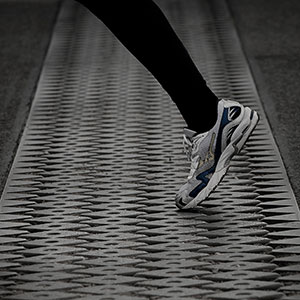 At the time when my weak butt diagnosis happened all I cared about was running more. Today, I’m a little older and wiser and I care about having a balanced body overall. As I said, I still run but I’m a little smarter now about working out the whole body.

I am glad my diagnosis was not something more severe and that I was able to fix my dead butt syndrome my simple exercises and stretching that helped me to learn how to strengthen glutes.

The condition is becoming more common but there are fixes. I would encourage you to consider going to yoga firing up those glutes to build additional strength and combat weak hamstrings. Also the standing desk won’t hurt to try.

Have you experienced dead butt syndrome?