Sometimes I write posts based on experiences in my pre-blog life. This is one of them. Depending on where you grow up, shooting guns may be normal for hunting, clay pigeon shooting or target practice. Today I’ll share about the time I shot a gun.

I grew up in a family where hunting was normal although not a dominant part of our lifestyle. So the idea of guns wasn’t entirely foreign to me but I didn’t really have any hands-on experience with firearms – until the time I shot a gun. 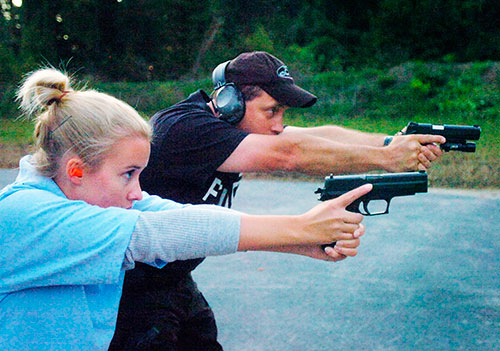 The Time I Shot a Gun

I went through college with the intent to become a newspaper reporter. As I neared spring graduation I interviewed for several jobs and accepted the one that sounded like the best fit. However, I had little experience with the beat I would be reporting on – cops and courts.

But being a reporter is all about learning so I was all in. I asked a lot of questions, looked up law enforcement terminology I didn’t understand and took in all the information I could.

In the fall of 2007 the local police department in Sandusky, Ohio I was reporting on announced they would be holding a Citizen Police Academy. This would be a good story, I thought. Wait… What I if I went to the class too?

After a little discussion with my editor I enrolled. The classes were in the evening so they didn’t interfere with my normal work duties and I was so engrossed in my work that going to class at night to learn more about the police didn’t seem like work at all!

The class would contain a few highlights – a police ride along (which I had already done but was eager to do again), a ride on the boat patrol (yes, patrolling Lake Erie) and shooting firearms.

The Time I Shot a Gun

I was a little nervous for the firearms night. Most people were excited, which I understand. But from my reporting I also knew how devastating and harmful firearms can be when in the wrong hands.

I was very cautious with my approach, making sure I understood everything that was going on before I pulled the trigger. I was also nervous about the gun jamming or something going wrong. But there was a police officer helping me every step of the way.

At the time I distinctly remember keeping my finger away from the trigger until I was completely ready – which is when the first picture was taken. When I was ready I lowered my finger and wrapped it around the trigger. I pulled back.

Whoa! I fired the handgun several times and I also tried a shotgun that night which I thought was nearly going to knock me over – it was so powerful! 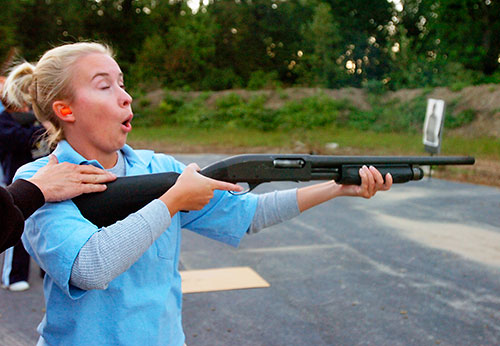 I went on to shoot a second time with the sheriff’s department. Later in my career I had opportunities to shoot again with a gun control class and a concealed carry handgun class – but passed. Twice was enough for me. Looking at these photos I noticed I am still styling my hair the same way seven years later!