Pick your own farms are a popular way to find and purchase fresh fruit, while spending time with family or friends. Strawberry picking has already become an annual favorite for our family. Apple picking is a particularly popular fall activity. We went apple picking for the first time in 2017. The experience was fun, and left me wondering can you save money apple picking?

Today I’m going to share further detail about our apple picking experience and whether or not we saved money by picking our own apples instead of buying them by the pound at the grocery store. 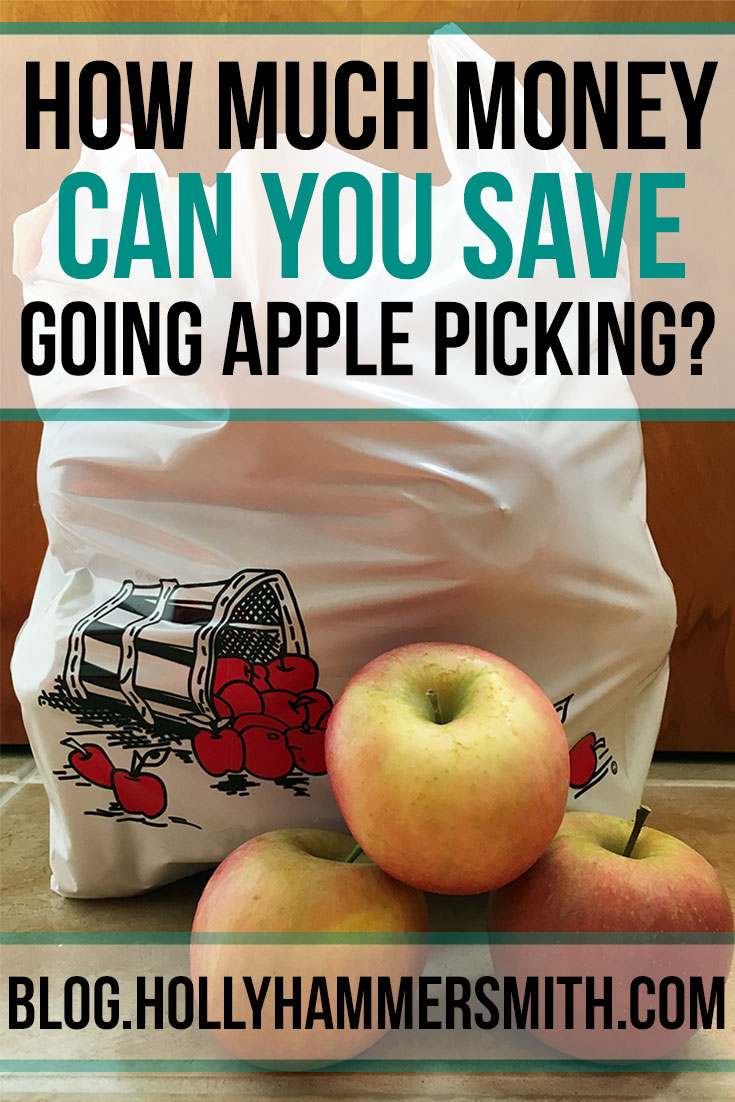 Where We Went Apple Picking

Can you save money? The short answer is yes! Learn about how you can save money apple picking and exactly how much it costs to pick your own apples. For many people, food is one of the largest expenses in their budget. More so, natural, healthy whole foods sometimes tend to be more expensive than processed foods.

We have gone to Miller’s Apple Hill in Amherst, Ohio to pick apples ever year since 2017. Apple picking season typically runs from late August until early November, depending on your location, the orchard and the type of apples grown.

This year in Ohio, the apples are a little late so the first week of picking is actually this week. Different apples are ready to be picked at different times. We normally go apple picking in late September and a dozen varieties of apples are typically available.

How Much Does Apple Picking Cost? 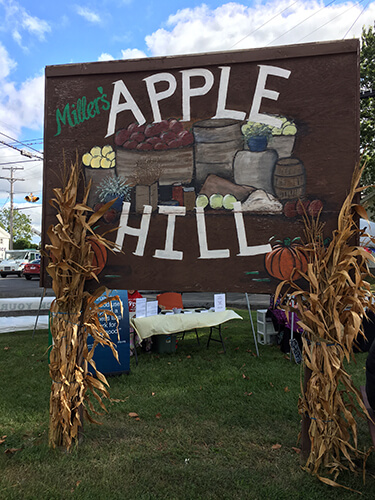 How Much is Apple Picking?

Payment was easy for the apple picking cost and credit card was accepted with no additional fees added on by the orchard. Staff directed us where to enter the orchard and handed us a slip of paper containing information on what varieties of apples were available and in what row of the orchard that variety was located.

Related blog posts:
•  Apple Harvest Tips for the Home Gardener
•  Hardneck Garlic Plant and Growing Tips
•  How to Clean Up and Put Your Garden to Bed
•  Where to Buy Cheap Groceries

How Many Apples Are in a Half Bushel?

Not having done this before or understanding the cost of apple picking, we opted to purchase one half bushel and we filled the bag to the brim. It wasn’t until arriving home that I counted and weighed the apples and found we had picked a total of 44 apples!

At $20 for the bag in 2017, that meant each apple cost 45-cents for our apple picking price. We have returned to this same orchard to pick apples each year. We like the total cost to pick apples at this orchard.

When looking at how much does it cost to go apple picking, you need to consider the apple price as well as distance traveled. The price per bushel has gone up each year which isn’t too shocking with inflation.

In 2019, we paid $22 per half-bushel. A quarter peck apple picking bag was also available for $5. The prices are the same for 2020 as they were in 2019. In 2021, the price did go up again it is now $24 for a half-bushel. I would expect the price to likely increase for the 2022 season as well due to cost of living and inflation. However, apple picking remains within our budget and worth the time.

Pick Your Own Apples 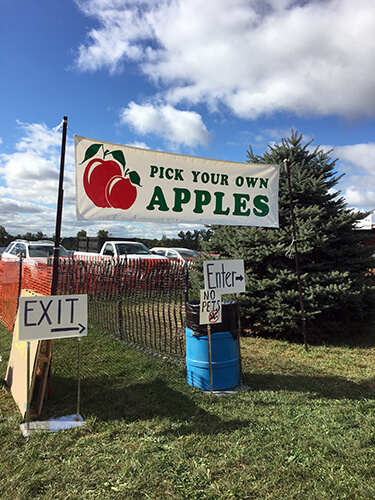 How Much Did the Apples Cost Per Pound?

The half bushel bag weighed in at 24 pounds so that meant our apples cost 83-cents per pound. (The weight of the bag was right on par as I had read prior to going apple picking that a full bushel of fruit typically weighs 48 pounds.)

I think more, or fewer, apples could have fit in the bag – depending on the size of the apples selected. The apples we picked were large when looking at how much does apple picking cost.

We took our time and selected apples that were not only large but also contained few to no blemishes. In total, the picking process took under 30 minutes.

The United States Department of Agriculture has the price of apples today at $1.62 per pound, as of 2016, their most recent data available. A simple comparison shows that yes we did save money apple picking.

In fact, at 83-cents per pound, according to Statistica.com (a statistics company), these apples cost the same price per pound as store-purchased apples would have cost more than 20 years ago back in 1995!

This data on apple picking prices is based on the Red Delicious apple, which was one of the varieties available at the orchard. Keep in mind, there are many apple picking farms along with orchard apple picking options.

Based on the most recent USDA price, by picking your own apples you can save roughly 79-cents per pound. In total, with our 24-pound bag in 2017 we saved $18.96 over the national average retail price.

In addition to saving money, I think the apples we picked were probably a little healthier than store-bought apples. Not only were they large but there was little wax on them and they were local and fresh. I did not ask the orchard if the apples were grown organically, but this is something I would like to research further. 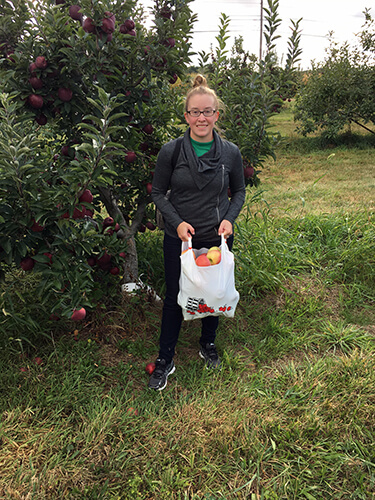 How to Use and Store Apples

Once home, I washed and dried all of the apples by hand. If you want to make sure the apples are very clean you might wash them with a fruit wash. I then sorted the apples according to variety.

Apples with no blemishes were stored in the refrigerator crisper drawer for immediate eating. Apples with some blemishes and were used the next day when I made homemade applesauce.

In total I canned six pints of homemade applesauce. I used the 16-oz. Regular Mouth Ball Mason Jars. Many people will use hand-picked apples for baked goods such as homemade apple pie or apple cobbler. 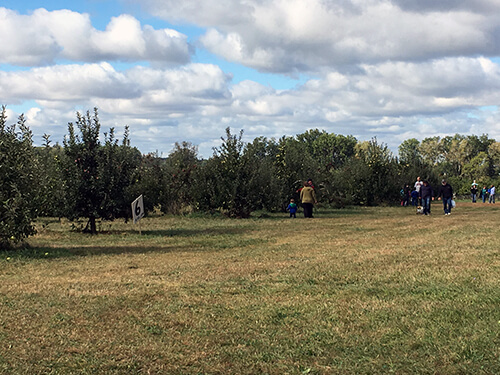 In summary, if you want to save money apple picking, consider the following tips:

• Call ahead and ask how how much the apples cost. You can save money apple picking by selecting an orchard with a lower cost per bushel, or per peck, of apples. This information may also be available online.

• When I looked for orchards to pick apples at, some of the orchards also charged an admission fee. Miller’s Apple Hill did not charge a fee. Select an orchard without a fee, in order to save money apple picking.

• Select an apple orchard near where you live. By doing this you will spend less money on gasoline, if you drive a vehicle. Unfortunately, most apple orchards are 30 to 40 minutes from where we live. The orchard in Amherst was a 40-minute drive. However, I still believe we were able to save money apple picking. We make sure to take our more gas efficient vehicle for this trip each year. 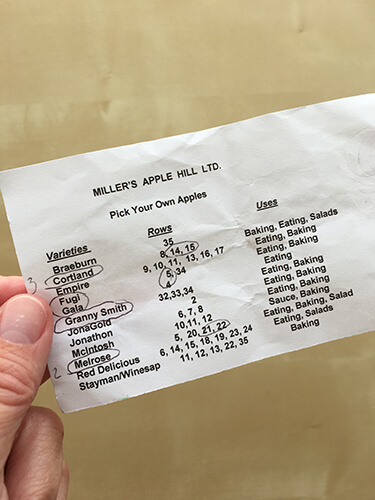 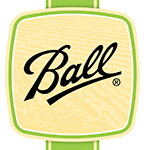 • It may be difficult to eat all of the apples you picked because it’s such a large quantity of apples at one time. If any of the apples spoil or go uneaten, you can lose money. Instead of the refrigerator you can store fresh produce in cardboard boxes lined with newspaper or in a fruit storage container. The fruit should be kept in a cool, dry place and checked frequently for spoilage.

Between placing apples in our crisper drawer, some in the basement and canning, the apples usually last us several weeks. As we eat down the crisper I move more apples to refrigeration as they seem to store best in that environment for us.

I haven’t done research into apple varieties but if you do this you can find out which varieties store best and eat in the proper order. However, I do know that late season apples, in general, tend to store better than early season apples.

It’s also important to be gentle with transport and storage of your apples so as not to bruise the fruit any further. This might sound odd but we have found if we bring a laundry basket with us when we go apple picking, then place our bags of apples in the basket, it keeps them from rolling around the vehicle on the drive home. The last thing you want is to damage your fruit after you pick and buy it!

• Home canning is another great way to preserve the harvest so that it can be stored and consumed later. Properly canned and stored foods can easily be stored for six months. Learn more about the basics of home canning by reading my home canning post. Usually I make applesauce and apple butter. The applesauce is either plain or I add cinnamon. 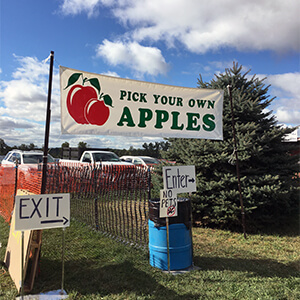 Overall picking apples has been a great experience for our family and I do think you can save money apple picking by following these tips and suggestions. However, no matter how much money you save, you cannot put a price on the experience of picking your own apples.

We now have have a new annual fall family tradition in the works. In fact, we ate the fresh apples so quickly the first time we picked that I wished we had picked a full bushel. Now each year we pick a full bushel of apples.

Have you ever gone apple picking? How did you like it?