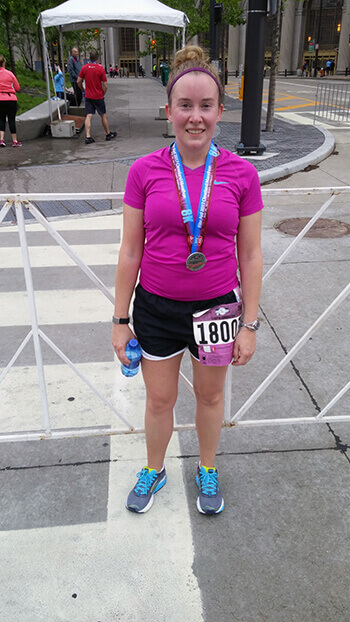 This was my first time running the Rite Aid Cleveland 8K, which was added in 2016. Runners can select from the full marathon, half-marathon, 10K, 8K, 5K or the Challenge Series, which is a selection of two of those races combined – one to be ran on Saturday and one on Sunday. The 8K distance is 4.97 miles.

Race morning weather was perfect. While it was overcast, it wasn’t too chilly. It was about 55 degrees at race start with some mild winds coming off of Lake Erie.

I was going to wear a sleeveless shirt, and switched last minute to a T-shirt. I think that was a good decision as I felt comfortable during the race and the T-shirt helped me avoid another armpit chafing disaster. 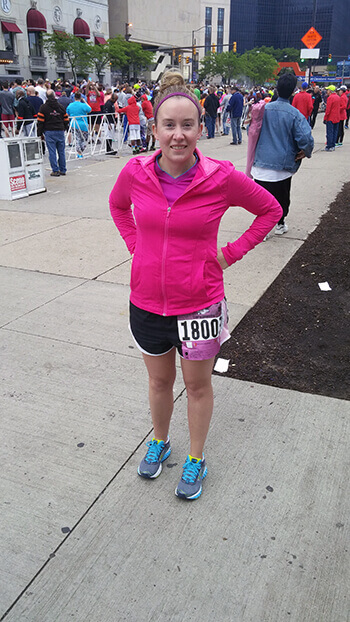 On race day morning I got up at 6 a.m. and immediately drank 20 ounces of water. I changed into my race day outfit and ate one piece of toast with peanut butter. This has been a pre-race staple breakfast for me for many years. We left home around 6:40 a.m. and arrived in downtown Cleveland right around 7 a.m.

There was little traffic and we were able to park easily just off of Euclid Avenue and E. 6th Street. This was a few blocks from the race start – which was near Public Square. In retrospect, we were there a little early! We actually sat in the car for a bit. I wanted to save my legs for as long as possible – the less time standing around on pavement – the better.

I put my race shoes on by the car and we began walking down to the race around 7:20 a.m. Once there we saw many runners, the starting line and corral. The setup was easy to find and there was a massive row of porto pots and no wait time.

Runners began entering the corral for the 5K. I stayed off to the side and did some light stretching. I went to the restroom around 7:45 a.m. and still saw few Rite Aid Cleveland 8K runners entering the corral. I had read in the Runner’s Agenda that the 5K would start before the 8K, but both races ended up starting at the same time.

This was a bit confusing and had I realized they were starting at the same time I would have entered the corral sooner to obtain better positioning. Around this time I also drank a 5 Hour Energy shot.

I have had these a few times before and they don’t bother my system. Normally my pre-race routine would be to have an Espresso Love GU. I wasn’t able to get to Fleet Fleet Sports to buy any GU before race day. 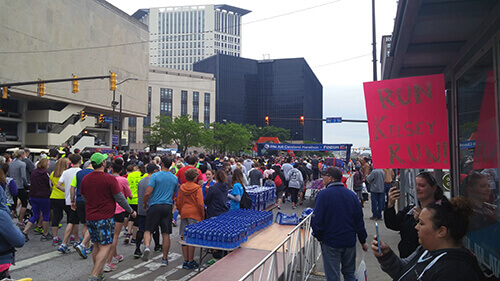 I entered the corral shortly thereafter. I did see Emily prior to the start (she was running the 5K) and my husband’s cousin who was also running the Rite Aid Cleveland 8K. When the race began, the start was slow.

Once I reached the start line I was still stuck in the pack and began to panic. There were many walkers and strollers around me and I wanted to be running – now! 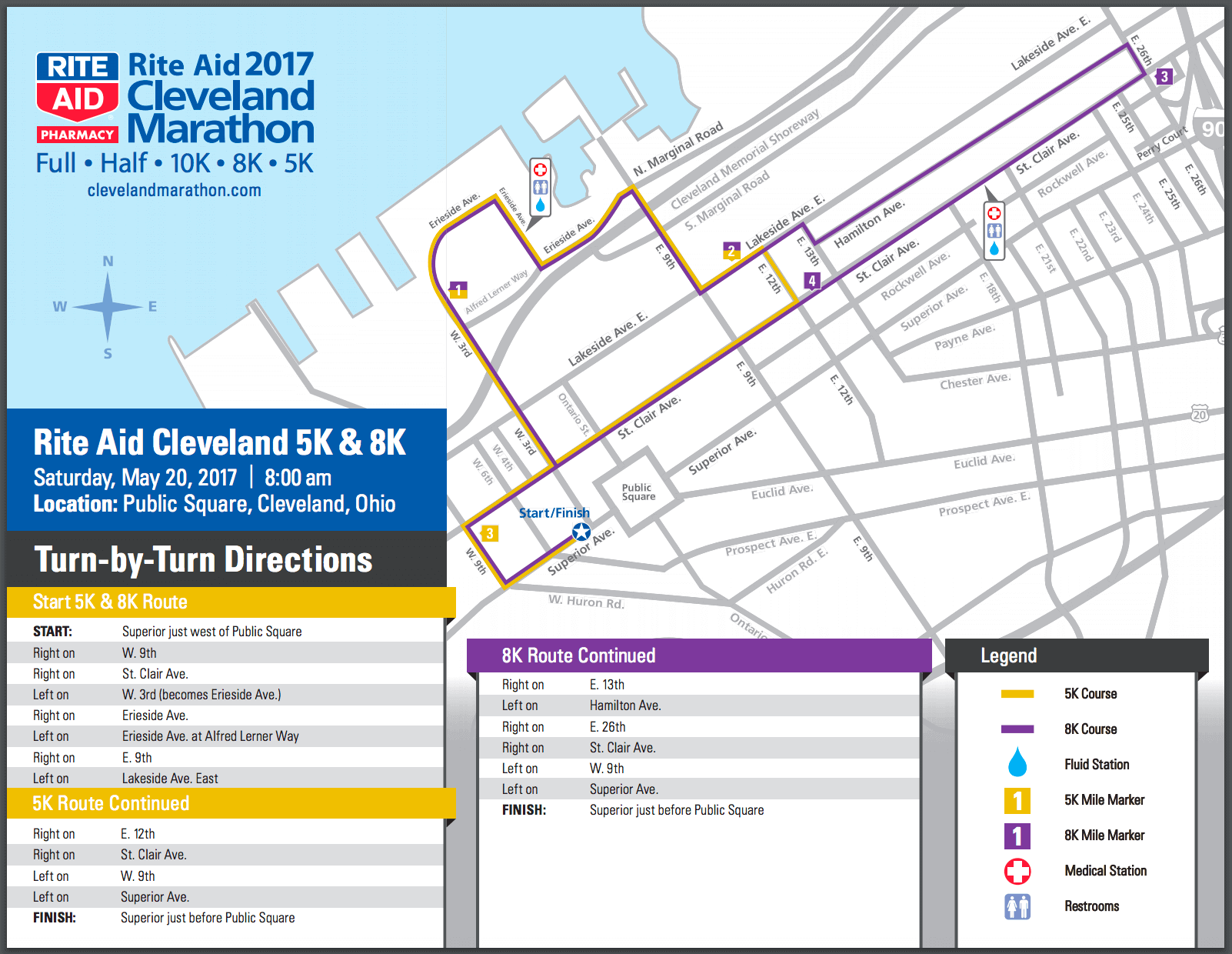 I spent the first 0.25 mile or so trying to dodge walkers and those running at a slower pace. This was definitely a bit frustrating and I found myself wishing I had lined up closer to the front of the pack. In between the dodging I was delighted to see and hear Cleveland Indians drummer John Adams beating his big drum for the Cleveland Indians to cheer us on! The pack finally began to thin out as we ran down the hill around FirstEnergy Stadium – Home of the Cleveland Browns. My first mile was 11 minutes.

Shortly after this downhill turn, of course, we had to run uphill. This was the most challenging part of the course in terms of terrain. I kept it slow and steady up the hill. Many runners were already walking here but I knew it would be hard for me to make up time if I walked.

During this stretch I ran down Lakeside Avenue and then down Hamilton Avenue. The course was flat from here on out. There wasn’t much for scenery but that was fine by me. This was still the first half of the run. I felt good and kept a steady pace.

I was now running down St. Clair Avenue and back toward where the race started. The second half of the course was encouraging to me because I knew was was now more than halfway done. There was a second water stop here and I did get a cup of water. I only took a sip to wet my mouth and walked a few steps. I still struggle with drinking while running without spilling water all over myself. I was able to get back on pace pretty easily.

I still had no idea where I was at on the course in terms of miles. I wore my Timex Ironman Sleek 50 Watch (not a Garmin GPS) but based on my time I knew I was nearing the finish. Once I reached W. 3rd Street I could hear spectators cheering at the finish. I knew I was close to the finish but I was hesitant to pick up the pace too soon. 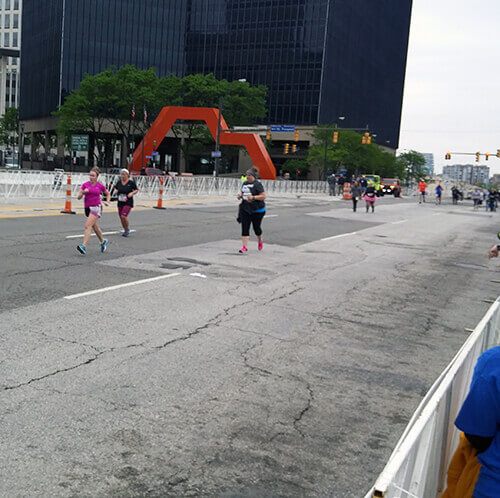 As I rounded the corner of W. 9th Street I ran faster and then when I reached Superior Avenue I kicked it into full gear. Here I heard John playing his drum again and I saw a race photographer.

Shortly after I spotted my husband and daughter along the sideline. At this point I was a running mama on the loose I sprinted to the finish line just before the clock time hit 53:00, and received my finisher’s medal shortly thereafter.

I had a 5 Hour Energy shot fueling me, but more than that, I had four months of training and a three-year comeback in the making fueling me. I was a mother running with reckless abandon for myself. This was MY race!

Here’s a video of me crossing the finish line:

As a participant in the Rite Aid Cleveland 8K race I received a hefty medal and a cotton race T-shirt. I would have really liked to have received a tech T-shirt. Many local 5Ks offer tech shirts and the registration fees are comparable, or even less.

Post-race refreshments included Quest Cereal Protein Bars, bananas, pretzels and bottled water. My only major concern on race day was the corral at the start. In the future it would be helpful to have walkers at the back of the pack and/or have runners lined up based on expected finish time. 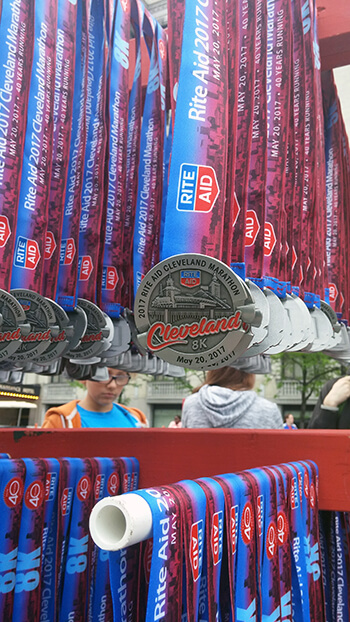 There were two water stops on the course. I saw a mile marker for Mile 1 but never saw any mile markers beyond that. However, another runner told me the course was indeed marked.

Course turns were clear and Cleveland police officers and/or volunteers were at all but one intersection that I ran though. Thank you Cleveland Police and race volunteers!

Overall I enjoyed the race and the atmosphere was laid back and fun. The Saturday events also include a 5K and Kids Run – making it a family-friendly event.

Parking was a breeze, as was finding the race start and we encountered no road closures upon arrival or departure making attending this event easy. The course itself was enjoyable and offered nice views of downtown Cleveland. 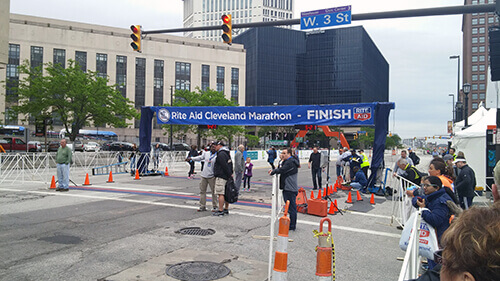 On a personal note, the entire experience of running my first road race in three years, and my first road race post-baby was incredible. I’m still in shock over my performance, which pretty much blew my goal time of “under one hour” out of the water!

There was a lot of time and commitment involved with training “from the bottom up” but in the end the preparation was worth it. I’m happy to have made a return to running and to have made that return with the race that is pure Cleveland.

Links to recaps written by my fellow Cleveland Marathon Ambassadors: