Race History: In 2012, the Rite Aid Cleveland Marathon weekend celebrated its 35th year. The events have changed and expanded over the years — which included the addition of the half-marathon years back. That’s the event I ran in 2012. A full-marathon, 10K, 5K and kids run are also offered as part of race weekend. This is a full review of the Cleveland Half Marathon.

Cost: Registration for the 2013 race is already open and discounted rates of $50 for the marathon, $40 for the Cleveland Half Marathon, $15 for the 10K; and $10 for the 5K are being offered through May 31. Rates will periodically go up until race day. 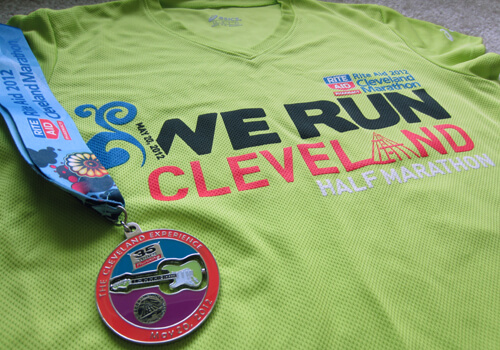 What You Get: All runners received a swag bag which to my understanding contained the same swag, regardless of which race the runner signs up for. In my bag I received an Asics technical T-shirt (customized for the Cleveland Half Marathon race), some coupons and vouchers (including a virtual bag provided by Rite Aid) and some Tampax (Did the guys get this too?). Race finishers in the full and half receive a medal at the finish.

Expo: The expo provided another opportunity to grab some freebies — from tuna samples to 5-Hour Energy bottles — by visiting various sponsor booths.

Without many big expos to compare this one too (my only other real expo having been at the Glass City Marathon) I would say the Rite Aid Cleveland Marathon expo was a decent size, but nothing to write home about. I received ample samples by visiting the booths.

Parking: There were two parking factors to consider this year – the expo and the actual event. Parking at the expo was $8 with many an attendee participating in their own sort of revolt.

Basically dozens of cars parked along the roadway outside of the IX Center, where the expo was held this year, in order to avoid the parking fee. On race day we parked only a few blocks from the stadium for a fee of $10 (plus tax).

I heard some runners more familiar with the area (or just lucky) managed to find free parking at the race. Parking will depend greatly on what time you arrive downtown. The streets were set to close at 6 a.m. so runners were advised to arrive before 6 a.m.

On our way we saw some streets already blocked off at 5:30 a.m. – although not yet manned by police. Either way, expect to budget some parking fees into your race weekend when you run the Cleveland Half Marathon. 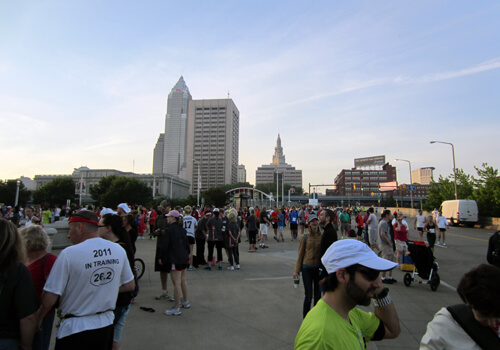 Race Start: Logistically the race start caused the biggest issue for me. Again, this was the largest race (14,000+ in the half-marathon) I have ever run in.

However, considering the event is in its 35th year, I was a bit surprised with the “cluster” I found myself in the middle of at the starting line. In short, there should be some enforcement around the starting line to keep spectators out of the way.

Runners were told around 6:40 a.m. to start making their way into the corrals for the 7 a.m. start — if they hadn’t already. I spent 20 minutes trying to get to the 11:00/mile corral but due to crowding, never did. I settled in the 9:30/mile corral.

Runners in the 10K were asked to step away from the corrals as well due to their 7:15 a.m. start. Many did — but some were still jut too close to the corrals.

I understand friends and family wanting to cheer their loved ones on — but it just made the actual race participants getting through all the more a challenge and left me feeling a bit uninspired at the beginning of my first Rite Aid Cleveland Half-Marathon.

Course Description: There were a number of gradual uphills and downhills in the first few miles. The course then evened out until the “beastly” hill around Mile 9 or 10. After that there was another gradual hill on a bridge.

Finally the course ended with a downhill finish. The course is all on pavement and city streets. I would advise you keep an eye on the road — as I managed to avoid stepping foot in a number of water cover holes and potholes along the course.

Overall the course was scenic, offering views of downtown, Edgewater Park, Ohio City, Tremont and more. Crowd support was overall very good and had I not been so overheated due to the ghastly temperatures this year, I would have enjoyed the sights and sounds much more.

There is something empowering about running through what are normally very busy city streets and viewing the skyline of one of America’s greatest cities. GU was offered at Mile 9 and water and Powerade were offered about every two miles. 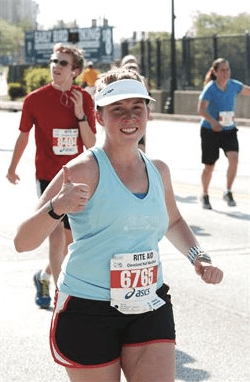 Race Finish: The race finishes just outside Cleveland Browns stadium and here there were hundreds gathered. After crossing the finish line runners were promptly handed water bottles and their medals.

There were also multiple options for post-race fueling including chocolate milk, pretzels, bananas and dried fruit.

There is a post-race party for the Cleveland Half Marathon at the end of the race which includes a beer garden (each runner receives one free drink), live music, photos and more samples including smoothies and tea for runners.

Overall I was pleased with the post-race fare. Food was also available for purchase for runners with more of an appetite, as well as for spectators.

By having the race at the Cleveland Browns Stadium, runners were able to use restroom facilities on site and step out of the sun  – an added bonus.

Summary & Rating (1-10): I would run the Rite Aid Cleveland Half Marathon again. There was too much to take in and enjoy and it’s really challenging to recount it all in one post.

I would like to see more vendors and freebies at the expo next year and better crowd control at the corral start. There were also some water stops along the course that ran out of water and/or cups, which was disappointing — especially with the heat on race day.

Follow up questions? Please let me know in the comments and I’ll try to help as best I can.

Disclosure: As a 2012 Rite Aid Cleveland Marathon Blogger I will receive complimentary entry into the race of my choice, along with special access to pre and post-race events, in exchange for writing about my training for this event.