Race History: This annual race started in 2005. This was my first time running the Cleveland 10-Miler, which is organized by Hermes Road Racing. There were about 1,500 participates in the 10-Mile race, making it a mid-sized field. In addition to the 10-Mile race, a 5-Mile two-person relay is also offered.

Cost: Race fees vary, with discounted rates the earlier you register. I believe registration began as early as late 2011 for this race. I paid believe I paid $35, in addition to a small online transaction fee.

What You Get: Short-sleeved technical T-shirt (mens sizing only). Finisher’s medal awarded upon completion of the race. There were some booths with freebies post-race, including 5-Hour Energy, which had reps on-site giving out samples.

Packet pickup was offered pre-race, as well as during designated times the two days before — an added bonus.

Parking: Parking is at Edgewater Park. You can opt to park on either the west side (race start) or east side (race finish) both lots provided ample room for participants, but carpooling is always a plus to ensure space. I arrived one hour before race start, and at that time parking space was readily available.

Race Start: The start of the race was a bit congested due the number of participants, however, there was no urgency to push to the front with a chip start and chip finish.

The race started promptly and reminders about locations of the water stops were given — an added bonus. There were also portable toilets and a park restroom near the start for last minute needs.

Course Description: The course takes runners by some scenic views of Lake Erie and the Cleveland skyline, but mostly at the beginning and the end of the race. In between, runners trek through the Edgewater neighborhood and Lakewood.

The course is mostly flat and entirely paved. The last mile is downhill. There was some crowd support along the way in the form of residents checking out the race, but otherwise no huge cheering sections. 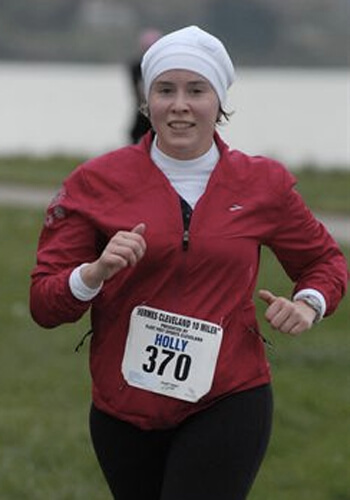 Race Finish: The finish is right alongside the post-race party tents where there was live music and food. I had a bottle of water and a banana. There was also some kind of egg casserole served up warm for runners.

Summary & Rating (1-10): I would definitely run the Cleveland 10-Miler again. I would probably park in the east side lot next time and would arrive an hour early again.

I hope women’s shirt sizes are offered in the future for this race. This is a great spring half-marathon training race, and as an added bonus race results were posted online the same day. Rating: 8/10

Follow up questions? Please let me know in the comments and I’ll try to help as best I can.