The weather played an integral role in the performance of every runner on the course Sunday. I spent much of the race praying I would not overheat. As I saw more and more runners begin walking, sitting on curbs and being taken away on stretchers — finding the will to continue became even more challenging. 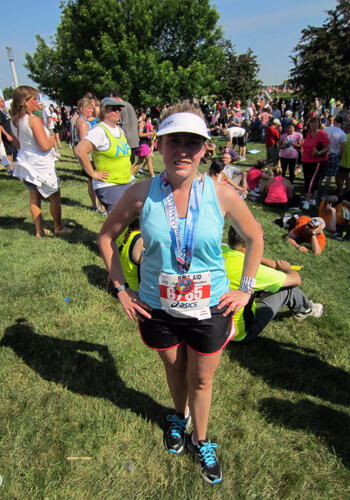 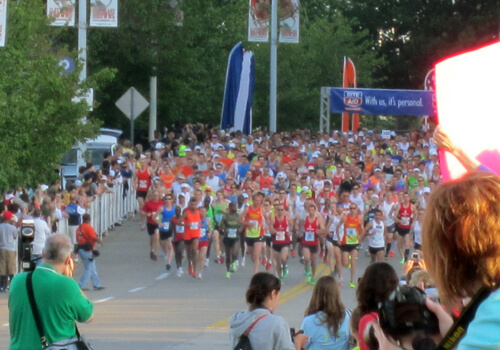 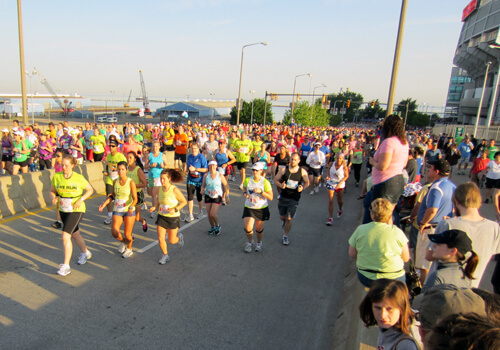 Can you spot me?

Mile 1-2: Within a half mile of the race start I already knew this was going to be rough. I was almost immediately covered with sweat as we tackled some gradual hills. The first water stop was at Mile 1.9 and despite drinking massive amounts of water the 24-hours before the race, my lips were already parched. I came to regret not having a handheld or even a disposable water bottle with me.

Mile 3-5: We were still by the lake at this point so at times there was a cool breeze. The first real cheer section was around Mile 4 and kept me distracted. I felt like I was already exerting myself a lot even though I was not even halfway done with the race, however, I kept my pace on target with my previous half-marathon times.

Mile 6-7: Around this time I think is when I spotted Kimi. I also remember running into the sun and feeling like my face was on fire. When I reached a water stop I took some water with me and carried a folded cup another mile or so trying to savor every last drop. I was so thirsty!

Mile 7-8: This was just past the 10K split and when I first remember walking due to an overall exhaustion from the heat. Around this time I also bumped into blog reader Lindsey, and we ran together for what seemed like maybe two miles. We reached another water stop and again I had to walk and told Lindsey to continue on.

Mile 9-10: This is where I encountered what I’d like to call a “beastly” hill. From what race organizers said, construction altered the course and this hill became a part of the route. Soon I realized the mass of runners in front of me quickly became a mass of walkers as they tried to trek up the monstrosity. Around this time my left and right IT bands began to flare up. I continued to struggle with IT band pain through the end of the race.

Mile 11-13.1: I remember coming up on Mile 11 and hoping it was Mile 12. I also started to experience extreme chafing, despite slathering BodyGlide all over myself! I ran/walked more here. I wanted to finish the race running but kept debating at what point I would begin running again and not stop.

Somewhere between 12 and 13 I did — just in time to see yet another runner leaving on a stretcher. I prayed she would be OK — along with everyone else receiving medical attention. 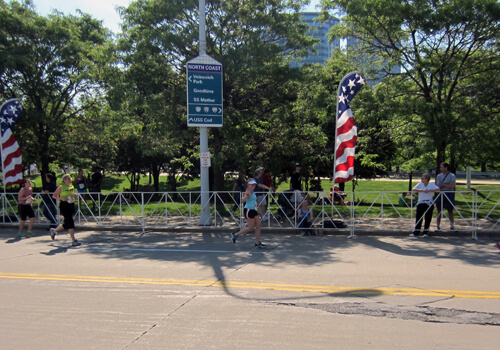 The last mile was a blur. I do remember a spectator beating a large, loud drum just before the finish and that helped pump me up. There was also a bit of a downhill at the end of the course, which was a welcomed reprieve.

The husband spotted me near the finish and yelled out to me. As soon as I crossed the finish line I focused my attention on getting out of the sun ASAP and putting my flip flops on my now blistering feet.

I have tried to separate the issues caused by the weather, along with my own personal training struggles, from the race itself. Overall, I was impressed by the amount of post-race food and refreshment provided to runners.

I enjoyed the crowd support along the course, especially the spectators on Lake Avenue and in the Ohio City area. And the race volunteers were more than appreciated!

Using the Cleveland Browns stadium as a race facility allowed easy restroom access, seating and some shade. I loved the Rite Aid Cleveland Half Marathon medals and the customized (full or half marathon) technical finisher T-shirts. Mine actually fits! The course was challenging with the hills, including the “beastly” one.

While I was disappointed in my performance, I had to remind myself of the challenges the heat caused for all of the runners on Sunday. I have no doubt I’ll be back again. Next year’s Rite Aid Cleveland Half Marathon is set for Sunday, May 19, 2013.

Thanks again to race organizers for having me be a part of the 2012 Run.Write.Blog team!

Disclosure: As a 2012 Rite Aid Cleveland Marathon Blogger I will receive complimentary entry into the race of my choice, along with special access to pre and post-race events, in exchange for writing about my training for this event.