On Saturday I ran the 1st Annual Bellevue Redmen Run 5K in Bellevue, Ohio. This race was held behind the high school and proceeds helped benefit the Bellevue Athletic Boosters. This was my second time racing in Bellevue – which is where my husband is originally from. He was familiar with the course, which was an out and back toward the cornfields. The finish was set up along the high school track.

I was nervous because the sky turned dark gray and before we knew it was pouring out. Fortunately it cleared up just before race start. Similar to last week, I intensely debated what to wear.

I opted for a T-Shirt but then realized I was going to freeze come race start, so I kept my long-sleeve zip up on. Of course, I ended up nearly over-heating around Mile 2.

I had an espresso love GU pre-race. T-Shirt pickup was a breeze and there were no bibs so really we didn’t have to do much besides warm up beforehand. Also, registration was indoors which was great because it offered warmth and restroom facilities for the runners.

Mile 1: My legs were cold despite trying to warm up. I just told myself to gut it out and try to maintain an even pace. My body would warm up soon. I finished in 8:45.

Mile 2: A few folks passed me around this time and I told myself not to get too discouraged — maybe I would pass them back on the return. I entered the cornfield area which would have been a great time to take a photo because the scenery was pure Ohio out there! I finished in 9:21, a little bit slower — but evening out my pace for a PR.

Related blog posts:
• Orange Theory Review First Class What to Expect
• Race Recap: Bellevue Rec Center 5K (2010)
• Running Cramps How to Stop Them for Good
• Do You Taper for a 5K? Reasons For and Against

Mile 3.1: I held steady and considering the course was an out and back I had a much better idea of when I should really begin to push myself. I passed three runners during the last half-mile or so giving myself a great confidence booster! (This hardly ever happens for me.) I ran as fast as I could during the last quarter mile — but no so fast I would throw up.

As I entered the final 100 meters I could finally see the end clock and knew I would PR. I wasn’t too surprised because I was uncomfortable during the whole race. I realized that I need to be uncomfortable to increase my pace like I did and improve my time.

You don’t PR by feeling comfortable and going for an easy jog. You PR by pushing hard, breathing hard and giving it your all. Of course, now I set myself up for wanting to finish in under 28 minutes. Can you guess what my 5K goal will be next year? 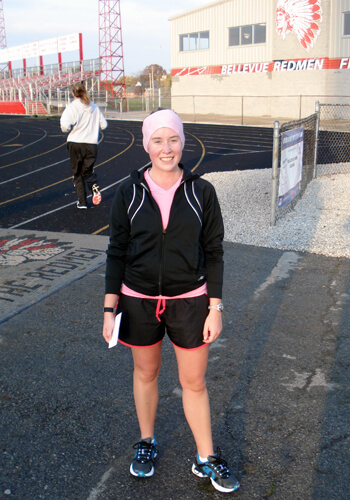 It took a while for awards to be announced because it was old-school slip of paper type-timing. Given the smaller race field I think that worked fine. The only real disappointment I had was that finisher medals were handed out, but only for each age group — meaning men and women competed against one another.

As a result, in all but one age group 1st, 2nd and 3rd place went to men. I believe there are separate categories for men and women in races for obvious reasons.

Would I Recommend This Race?

Overall I thought this race went well for being 1st annual and I would run it again. Finishers also had their pick of fruit and cookies post-race along with water and lemonade. Walkers were also welcome at this race. I hope next year the men and women awards are separate.