Many people start out by running 5K races. They might really start to enjoy running and before they know it they are moving up to the half marathon distance. That’s what happened to me. The longer your race distance is, the more training you need, today I’m sharing my half marathon training.

I’ve run more than 40 races to date including longer distances. I saved my training plan, tips to achieve the best results and exactly what I did. If you are looking for information about how to train for a half marathon I will share all of the details. 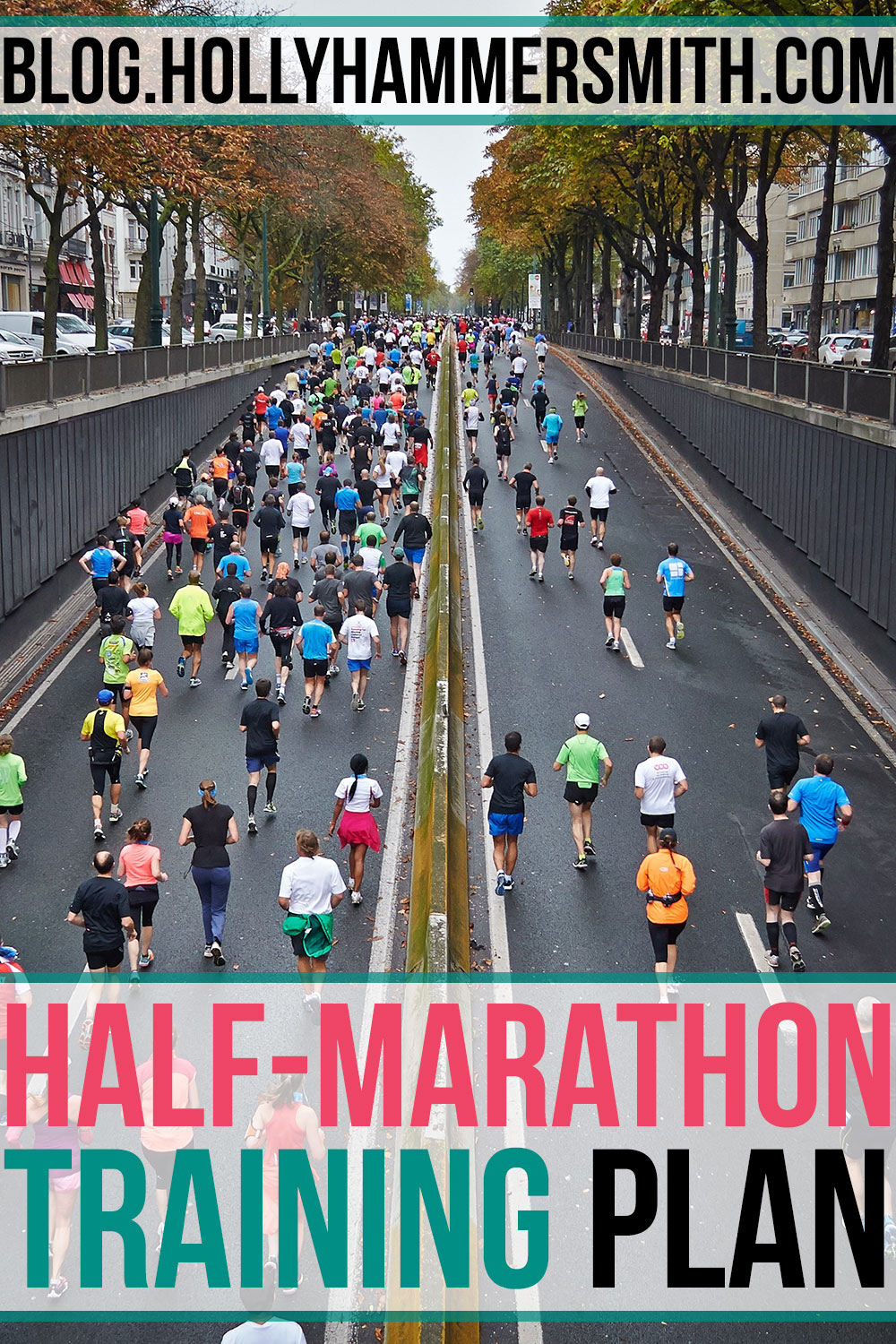 About the Half Marathon

I will share sample workouts, weeks and details about how I train for a half marathon race. This distance is 13.1 miles and will often take runners 90 minutes or more to complete. Beginning runners may very well be running for 2 hours or more during their race.

Because of the distance and time involved it’s paramount to create an adequate training plan and stick to the plan. Most runners will need three months or 12 weeks to adequately train for a half marathon distance. The base line may vary based on your athletic ability, current training and experience.

In this post I am going to combine a few years of training and tips. The sample workouts are from various times during my running journey. Along the way I figured out better what works for me. Most half marathons are either in the spring or the fall so training will begin in the winter or summer, respectively.

In addition to running, it’s paramount to include cross-training, strength training and active recovery such as walking and yoga. Also, keep in mind hydration and nutrition during your training cycle. Proper running attire may need to be purchased and/or running shoes too. I started running in 2008 and have covered all of these topics on my blog.

In 2011, I trained for and ran the Cleveland Fall Classic Half Marathon. Below is an image of my training plan during that race. This was as I was nearing race day, which is in November. This is a fall race.

More About this Training Cycle

In essence I ran three days a week. Back to back running, and five day a week plans have not been for me. I kept my mid-week maintenance runs at 4 miles each, but left room for a longer run should I desire. Sometimes I found I did have a great run where I just want to keep going.

That’s still totally possible with this plan. Then I had my weekend long run, typically on Saturdays. With this plan I was building up mileage, then tapering down, every other week. In the past I have tried to build up week after week and then I ended in failure.

For example, for my first half-marathon when I ran the Fort-4-Fitness Half-Marathon, my longest run pre-race was only 8 miles. With that race, I suffered IT band issues most of the summer too. Going into this training cycle my motto was run smarter, and therefore became a stronger runner.

Prior to the fall half, I had also signed up for two 5K races just for fun, to see the sights and possibly a garner a fall 5K PR. The first was the Bay Village Heritage 5K, and the second was the Bellevue Redmen 5K, both in October. I actually did PR on the second 5K.

The only hiccup with the 5Ks, as part of training for a half-marathon, is that in return, I had to swap my long run out, to be completed on a Wednesday. I have to say that the 10.5 miler planned for a Wednesday wasn’t the best. Other than that I felt confident with the plans I had laid out.

I also planned to purchase a group pack of yoga classes, and begin taking classes on Thursdays for a few weeks to help keep me limber. Thursday had become my favorite night for yoga because Friday was my rest day and it was a great way to end my (Saturday through Thursday) workout week as I continued training for a half-marathon.

In 2012, when I trained for and ran the Rite Aid Cleveland Half-Marathon and served as a race ambassador, I adopted the Hal Higdon training plan. Below is an image of my training plan during that race. Below you will find another training image. This image marked 20 weeks until race day.  At the time I had worked and reworked my training schedule five times over. This was my final copy.

At the time I wanted to see how the first leg of training would go, so I just posted the beginning portion. This took me through early March and brought me to my first potential road race of that year, the St. Malachi 5-Miler. This race would give me something to work towards over the next two months, and help me build my mileage base back up.

As I mentioned earlier, preparing for a half marathon race includes more than running. Here are some details and areas of focus that helped me:

• Rest: For the longest time I had been using Friday as my rest day. I decided to switch that up and rest on Sundays, which I hoped would give me more time to cook nice meals on the weekend too.

• Speed: I incorporated speed work into one of my weekly runs. I started small and see where this would go. The challenge with speed work will be running on a track in the winter, or trying to tweak the treadmill speed.

• Mileage: I slowly built my mileage base back up. I had not run more than 3.5 miles since my November half. At the time, 3 and 4-milers sound like long runs.

• Strength: I added strength-training back into my schedule. In the past I was really good with this, lifting weights two to three times a week, but I fell off the bandwagon. This training cycle I hoped by committing to a once a week session I would be able to actually maintain the weight-training long-term.

• Spin: I hit up spin class again for cross-training.

• Yoga: I strived to commit to practicing at least once week.

These were my goals, but how did it go? January is a big official “kick off” month for those who are training for spring half marathons so I documented an update at that time, and going into February. If you begin training in January for a May race the training cycle is about 20 weeks.

Between being sluggish, belaboring over the four pounds I gained after the holidays and being sick, I didn’t see much progress this month in my training. I also struggled with finding a new groove in my training plan in between personal commitments and attending yoga classes that interest me.

Overall I covered 23 miles in January, which is truly a month in the dead of winter. I also practiced yoga and managed to do a few cross-training workouts like using the elliptical and attending kickboxing class. Here’s my training schedule for that February:

Before spring hit, I also decided to buy some running gear I need. First, I purchased the Brooks Essential Run Jacket. If you would like to know more about how I selected a running jacket, check out my tutorial post. Anticipating spring showers, I also bought the Nike Feather Light Cap.

I think it was a good idea to wait until the end of January to make the purchases. Being it’s the off-season, I got both items for less than $50 total for my half marathon training. I also used a Garmin Forerunner 10 GPS Watch for all of my outdoor runs to track pace and distance.

Here are some notes I recored during my training cycle regarding my first person experience. Once it was February, without access to a treadmill, I hadn’t run in 12 days. My training also took a hit recently due to being sick (again). Two weeks ago we had a break in the weather and accomplished every scheduled workout on my training plan.

I’ve been going on walks, using the elliptical and practicing light yoga at home. I have an 8-mile long run planned this weekend and I will be taking a few studio yoga classes. As far as my training plan for the next eight weeks, I’m still sticking to my three-day a week running plan (as shown in the table above). My weekly long run is most vital to complete.

We are finally out of the dead of winter and I had hoped to end my last two weeks of half-marathon training with a bang. Instead this training cycle sounds like the same disaster it’s been for the last few months: skipped workouts, sub-par runs and a lack of energy and motivation. I’m still very much excited to run the Cleveland Half-Marathon.

In terms of running gear, April is also a great time to buy new running shoes. I always make sure to wear the shoes on several runs so they are broken in prior to race day. Never run a race wearing new shoes for the first time. New running shoes are a great motivator during the dead of winter training cycle.

I was traveling for business all of last week and didn’t hit many of my workouts. My diet and sleep patterns were also off. I came back Saturday and set out for my last long run of this training cycle (10 miles) and I only made it about four miles. I really beat myself up over it.

My energy was low and my mental game was not there. I have also been dealing with allergy problems. However, I realized this is not the end of the world. I’m still sticking to my plan of running and enjoying the race. 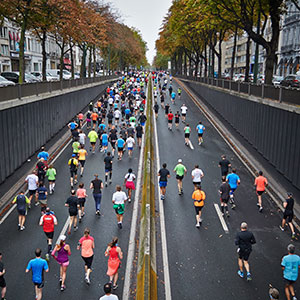 Finally, when entering half-marathon week I have rest days scheduled for Friday and Saturday. I always taper down and rest at least two full days prior to race day. Focus on nutrition, rest and hydration.

What questions do you have about training for a half marathon?