Every year I write a year end recap of my year and include notes on how many miles I ran, this is 2010 by the miles.

1) Run 1,000 miles
When I set out on this one I thought I would be running 20 to 30 miles per week in no time. I had no idea what an IT band was or sesamoiditis. Now I know. The year-to-date miles will be officially calculated later today as I may go for one last run in 2010.

3) 8-minute mile (last time I did this was in high school)
Unfortunately I don’t have a set date this happened but it was right before my toe pain. I did a mile test and I recall about 7:55. It could have been on my now-deleted DailyMile account. The social running app shut down in 2019.

Related blog posts:
• Official 2017 Cleveland Marathon Ambassador
• The Time I Met Jake Gyllenhaal
• New to Running? 5 Items You Need to Have
• Do You Taper for a 5K?

5) Run my first 10K
Accomplished in July. Ran my second in October. Both races my time was nearly identical. 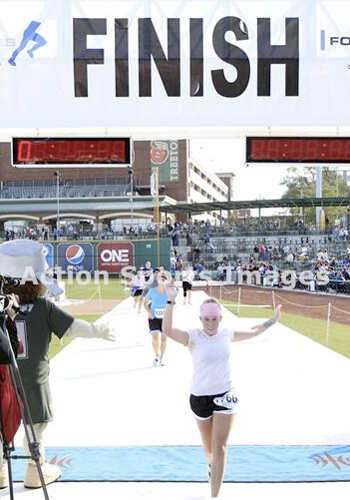 6) Run my first half-marathon
Accomplished September 25, 2010. So glad I went for it. Something a lot of people haven’t done. It’s amazing how many runners sign up for these races, yet in my family (including the husband) only two people have run a half besides me. Both of those people ran their first halves in 2010 as well.

8) Stay healthy!
I’m chalking this one up to accomplished as well. I had my ups and downs. Right now being a bit of a down. But overall I truly believe I lived a healthier lifestyle, both diet and exercise, in 2010 than the years before.

In 2010 I ran 10 races. That by far surpassed the total of five races I had previously run in my life. (Dad if you are reading, I am not counting the Goblin Gallop 1-miler from 2nd grade in this count.) 2010 was a year of many firsts. In addition to running my first half-marathon and 10K, I also ran my first 12K and first 4-miler. I also garnered my first age group award in August.